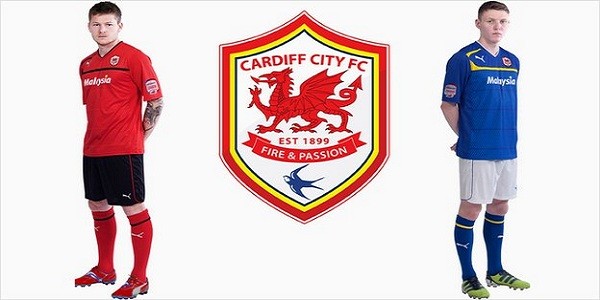 A football team’s home colours are their identity.

While players and managers move on, those colours remain, representing both the club as it is and as it was.  A reminder of fans departed and of history made.

In short, a team’s home strip is its legacy.

So what happens when those colours change?  Not slightly, the way kit designers have a habit of doing every two years, but completely?

What happens when you’ve spent your life shouting, “Come on you Blues!” and suddenly those Blues are wearing red?

This was the issue facing two league clubs in August.  For very different reasons, Cardiff City and Gillingham made the decision to wear predominantly red kits when playing at home.

For the Kent club, the decision was easily explained.  After all, they weren’t the first to wear a changed strip in celebration of their centenary year.

While the club was founded in 1893 as New Brompton, it wasn’t until 1912 that they became known as Gillingham FC.  So for the new season, the team would wear a version of the kit first seen 100 years ago – red with blue sleeves and collar.

For Cardiff the decision was less easy to explain and, for their fans, digest.

Their Malaysian owners claimed that changing from blue to red would make the club more marketable in Asia, where red is seen as a lucky colour.

As if that wasn’t enough, the club’s crest would also change.

In football, there are few things as anathema to fans as changing what has always been.

And as if to prove the point, such was the uproar when the plan was first introduced that the club claimed to have changed their mind, only to change it back again almost instantly.

So while petitions were signed and a campaign group called Keep Cardiff Blue was formed, the season kicked off with the Bluebirds playing in red.

And then they started winning… as did Gillingham.  And it got me thinking: what’s more important, tradition or success?  And if one has to suffer for the other, which would you choose?

Because Gillingham are top of League Two, five points clear having lost only two games all season; while Cardiff are just two points off top spot in the Championship.

So I doubt the fans are talking about their shirts anymore.

If recent years are a pointer, Cardiff’s form may well tail-off, while Gillingham may continue to yo-yo between Leagues One and Two.  But there is the very real prospect of two of this year’s success stories wearing very unfamiliar colours.

The traditionalists will remain, in Cardiff’s case more than Gillingham’s.  Because the circumstances are extremely different and while next season the Gill’s will be back playing in blue, Cardiff’s future is very much in red.

If their future is also in the Premier League, the owners will be proved right.

Although once there, don’t bet against the fans shouting, “Come on you Blues!”