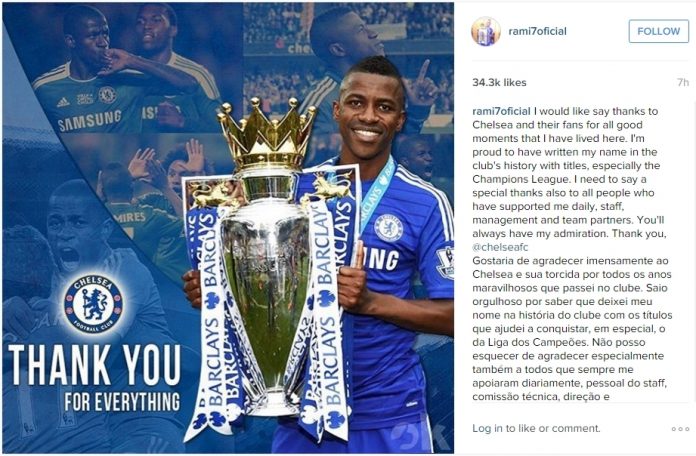 Chelsea confirmed the sale of Brazilian midfielder Ramires for a fee of £20m.

Ramires has joined Chinese Super League club Jiangsu Suning on a permanent transfer. The 28-year-old arrived at Stamford Bridge in 2010 and went on to win every major domestic and European trophy with Chelsea.

Ramires scored some memorable goals during his time at Chelsea including strikes at Wembley in both the semifinal and the final of the FA Cup as he lifted his first Chelsea trophy. His crucial goal against Barcelona in the Champions League semi-final second leg allowed Chelsea to progress onto the final and then win it against Bayern Munich.

During his five and a half years at Stamford Bridge, Ramires went on to make 251 appearances for Chelsea, scoring 34 goals.

The versatile central midfielder can operate as a holding midfielder as well as a right-sided winger and will now continue his illustrious career in China with Jiangsu under the management of former Chelsea player Dan Petrescu.

Ramires thanked the Chelsea fans and the club for the support and love he received during his time in England and claimed that lifting the Champions League trophy will always be the most memorable moment for him at Stamford Bridge.