Chelsea will be heading into their UEFA Champions League second round tie with a lot more confidence after this weekend than when the draw was made back in December.

The Blues had the weekend off to recover from Wednesday’s 89th-minute win over Everton at Stamford Bridge, whilst the FA Cup fifth round took place.

On Saturday evening, nine-man Paris Saint-Germain blew a late 2-0 lead to draw at home to Caen as Laurent Blanc’s side suffered four injuries.

Yohan Cabaye, Marquinhos, Serge Aurier and Lucas Moura all limped off at the weekend, although only Lucas is a regular in Blanc’s first team. Marquinhos has started 14 of PSG’s 25 Ligue 1 fixtures this season but only three in the Champions League, with David Luiz and Thiago Luiz the preferred option.

Javier Pastore is also out injured for the defending French champions.

José Mourinho’s side were late winners when these two met in the quarter-final last season. His squad has been greatly improved this season and are currently seven points clear at the top of the Premier League.

Paris Saint-Germain dominated the French league last season but head into Tuesday’s fixture in third position despite spending £50 million on David Luiz from over the summer and not losing any key players.

The Portuguese manager only has John Obi Mikel ruled out, although Oscar is a doubt, as Chelsea head into the first leg with a much healthier squad. 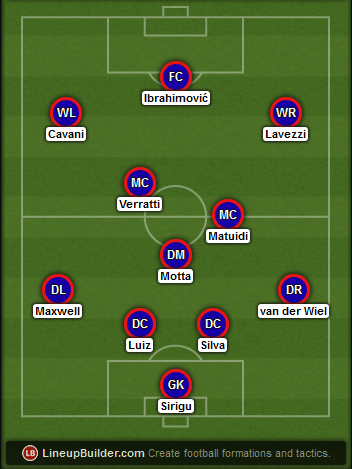 Lucas Moura would be a big loss for the hosts if he is not passed fit. However, the attacking trio they have in his place aren’t too shabby. Zlatan Ibrahimović has proven himself at the highest level over the years, Edinson Cavani is a top player and Ezequiel Lavezzi is targeted by a number of top teams as he is often a backup in Paris. They all know where they back of the net is. Laurent Blanc’s side play a 4-3-3 with three central midfielders. Blaise Matuidi offers a bundle of energy, Marco Verratti is a talent but very rarely involved in the goals and does give a few cheap fouls away in his own half. Thiago Motta is a talented and experienced protector of the back four. Mourinho will probably see David Luiz as a big vulnerability in the Paris Saint-Germain team and knows his game well. Gregory van der Wiel has not been in the best of form of late. He’s tasked with facing Eden Hazard. 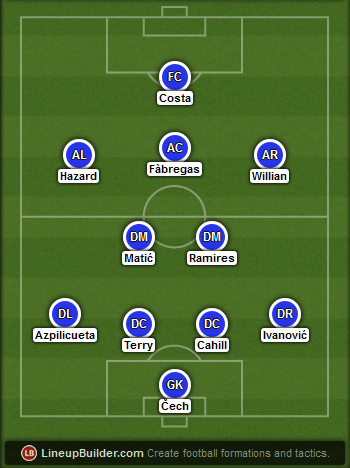 Petr Čech started midweek as Thibaut Courtois has made a couple of errors of late.  Mourinho did say he wanted Čech’s experience to face Everton but we think he’ll retain his place for this match.  We’re going with the experienced Gary Cahill to start ahead of Kurt Zouma too.  Ramires to play alongside Nemanja Matić to protect the back four whilst Cesc Fàbregas plays with the three attacking midfielders behind Diego Costa.

Eden Hazard vs Gregory van der Wiel
The Chelsea star is in a good place to put in a man of the match performance. We’re assuming Serge Aurier doesn’t recover from his injury at the weekend and that Gregory van der Wiel goes back into the starting XI. The Dutch right-back has been a good player over the years but cannot be expected to be the big attacking threat he has previously been whilst having the duties of keeping Eden Hazard quiet. He’s also out of form of late so Hazard may tear him apart at the Parc des Princes.

Diego Costa vs David Luiz
Few were in praise of David Luiz when he left Chelsea in the summer. Many considered the Brazilian a liability for the Blues in the most competitive football division in world football. Diego Costa hasn’t played for a few weeks following his three-match ban. The Spanish striker is fully fit and his movement should see him find space from the former Chelsea defender in the middle of PSG’s defence with Luiz not being the best marker. Luiz is also poor at marking from set pieces which is another area for Chelsea to take advantage of.

Zlatan Ibrahimović vs Gary Cahill
Zlatan Ibrahimović’s record against English side‘s in the Champions League is quite shabby with only three goals in 16 appearances, and all of those goals coming against Arsenal. He only got 68 minutes over the two legs last season due to injury. His threat shouldn’t be ignored as the Swede provides moments of magic and goals out of nowhere. He should have decent supply in this match, mainly from the wings.

Prediction: Paris Saint-Germain 1-2 Chelsea
Neither side have been at their best in 2015 but we’re leaning towards Chelsea to take a big advantage back with them to Stamford Bridge. Expecting José Mourinho to have a game plan for his side to get the better of both David Luiz and Gregory van der Wiel in particular , as well as set pieces. PSG haven’t been convincing in their own league of late and should Lucas Moura not be fit it’s a massive loss in creativity.