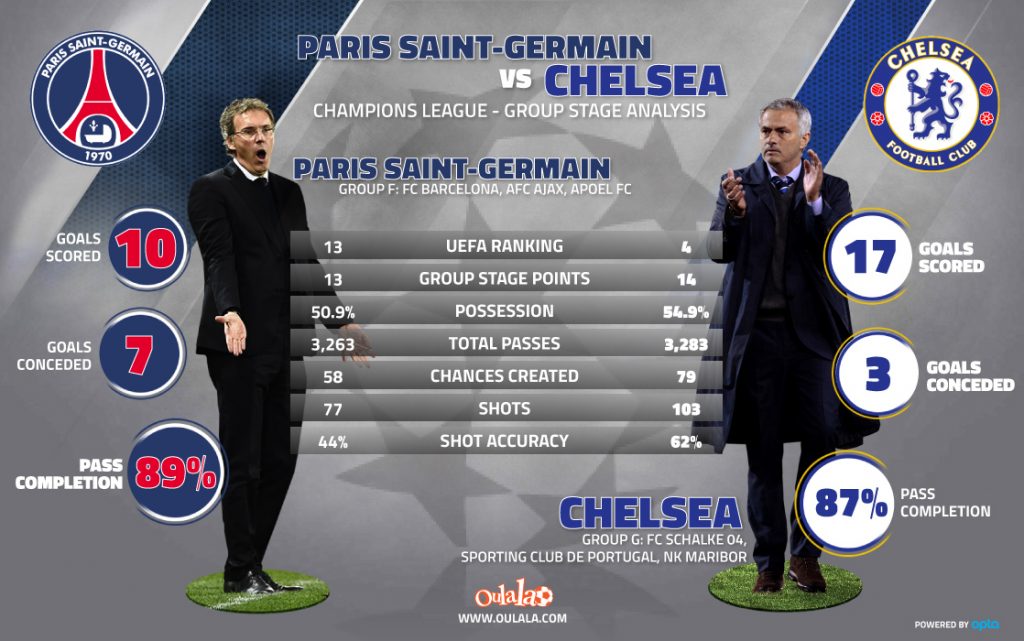 December’s Champions League last 16 draw in Nyon, Switzerland saw Paris Saint-Germain and Chelsea as the first two clubs drawn. Two months on and the two team meet again for the second successive season after last year’s epic quarter-final battle in which Chelsea came out on top on away goals after a last minute Demba Ba goal.

Chelsea manager Jose Mourinho had singled out Paris before the draw as his preferred opponent. The Chelsea boss had said that he had wanted his players motivated by facing a good team early on and also noted that the travel arrangements would benefit the fans if they drew the French club.

With Chelsea out of the FA Cup they have enjoyed a weeks rest since their win over Everton in the Premier League, however PSG enter the game following a disappointing 2-2 draw with Caen after two very late goals from the away side. Paris are also licking their wounds after injuries to a host of key players that are now unlikely to feature including Yohan Cabaye, Marquinhos, Blaise Matuidi, Serge Aurier, Lucas Moura and Thiago Motta.

Our friends at Opta powered fantasy football game Oulala have returned to the group stages with their detailed analysis and it is Chelsea that comfortably came out on top. As the overall group stage top scorers with 17 goals including a 0-5 away win in Schalke and a 6-0 victory at home to Maribor, the Blues scored more goals in two matches than the French outfit managed in all six of their games.

Chelsea were also very tidy in defence only conceding three goals in their six group matches. Only Real Madrid (2) and Monaco (1) conceded fewer. Paris however shipped seven goals, five of those came in their two matches against Spanish giants Barcelona.

Paris held a slightly better pass completion rate by 2%, however, Chelsea dominated with a 4% swing in possession and narrowly edged total passes made. The Blues attacking and creativity did not stop at goals scored. They also led Paris for chances created, shots and shot accuracy.

The two clubs approach the clash in very different ways. Chelsea hold the psychological advantage after their narrow victory last season while PSG sporting Director Olivier Letang has spoken of the club’s hope to gain revenge on Chelsea after the London club knocked them out of last years competition.