Manchester United go to Deepdale tonight in the final fifth round tie of this season’s FA Cup.

League One side Preston North End are the opponents after overcoming Sheffield United in a replay in the last round.

There were no draws in the weekend’s action meaning the winner of this will join Arsenal, Aston Villa, Blackburn Rovers, Bradford City, Liverpool, Reading and West Brom in the quarter-finals, with the draw taking place before this game kicks off.

Manager Simon Grayson will be without goalkeeper Sam Johnstone who is on loan from Manchester United, and Daniel Johnson who is cup-tied.

Grayson was victorious against Manchester United with then League One side Leeds United back in the third round of the 2009-10 competition.

Michael Carrick is the only played confirmed out injured for Louis van Gaal’s side but there are doubts over both Daley Blind and Phil Jones who picked up injuries in their midweek 3-1 victory over Burnley. 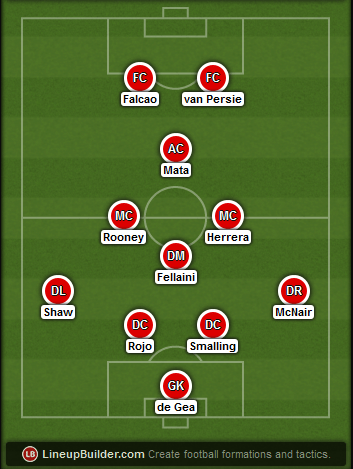 David de Gea has kept his place in goal in the previous two rounds including a replay so we expect the younger of Manchester United’s two Spanish goalkeepers to start this one. Louis van Gaal has praised Paddy McNair at right-back so we think the youngster starts ahead of Antonio Valencia tonight. Chris Smalling is the obvious replacement for Phil Jones at centre-back but Jonny Evans is an option. With two holding midfielders out Marouane Fellaini is the next option to sit in front of the back four. Resting Ángel Di María would give Juan Mata a rare start of late, whilst Ander Herrera can be expected to get a start too.

Robin van Persie vs Paul Huntington
Only Bristol City have conceded fewer goals in League One this season but Preston North End are going to be tested by a multi-million strike force. Paul Huntington played in the middle of a back three and will have a difficult time with the movement of Robin van Persie in and around the penalty area as well as his lethal left foot.

Luke Shaw vs Scott Wiseman
The middle of the park could be packed with a number of central midfielders so some width from full-back will help Manchester United open up the pitch. Luke Shaw is quick and has been putting in a number of crosses from the left wing when he’s played of late. Working down the wing could help draw the right centre-back out of position to free up van Persie and Radamel Falcao in the box.

Juan Mata vs Neil Kilkenny
Playing behind the two strikers, Juan Mata is a good option to open up the Preston defence with his passing ability. The Spaniard won’t be looking to run through the numerous defensive players in the League One side, but rather threading balls through to either striker and feeding the full-backs bombing on out wide.

Prediction: Preston North End 0-2 Manchester United
Manchester United weren’t as comfortable as the scoreline suggested midweek but a win is a win. They’ve beaten both Yeovil and Cambridge United without conceding a goal so far in this season’s FA Cup. We think over 90 minutes Manchester United will get the job done tonight with their superior attacking unit getting the better of the side two divisions below them.