Liverpool have waited five long years for this. Big nights at Anfield. Big Champions League nights at Anfield. Real Madrid, the European champions at Anfield, it can’t get any bigger than this. Carlo Ancelotti spoke about Liverpool anthems, Arbeloa said about the special Anfield bond – an air of romanticism can be felt ahead of this fixture.

Last time when Real Madrid visited Anfield, they suffered a humiliating 4-0 defeat. While expecting a similar sort of result is all but a day dream, but if Liverpool are to get something from this match, Brendan Rodgers will have to be spot on with his team selection and formation.

These romantic feelings mean nothing once you enter the pitch and the first whistle is blown. After that it’s all about winning or losing. Having lost their previous match against Basle, Liverpool must pick up something in their two legged tie against Madrid. A victory here will take them in a good position to qualify for the knock-out phase.

An unconvincing victory on Sunday against QPR has improved Liverpool’s Premier League position and the Reds will be looking to carry forward the momentum. The performance hasn’t been satisfactory though, but Rodgers is hopeful his side can lift themselves up for the big games.

Liverpool will play six games within 18 days from here on and their squad depth will be thoroughly tested. Joe Allen and Emre Can returned to action in the last match, but Daniel Sturridge, who picked up a calf muscle injury in training, is frustratingly out for at least four weeks.

With all focus centred on Mario Balotelli, who is struggling badly to deliver, Sturridge’s absence has forced Rodgers to move away from the two-man partnership upfront. Club legend and now turned pundit Jamie Carragher feels that the Italian should be dropped (tactical reasons) but it seems he is not only likely to start but get the necessary support upfront which he craves for.

Alberto Moreno will return to the side after being rested against QPR and along with fellow Spaniard, Javier Manquillo, should be named in the starting line-up in place of Jose Enrique and Glen Johnson, both started in the last match. Philippe Coutinho made a huge difference against QPR when he came on as a sub, and the Brazilian could start in place of Adam Lallana.

Rodgers must move away from the rigid 4-2-3-1 formation and deploy the diamond system that worked so well last season. Steven Gerrard should operate at the base of the diamond while Coutinho can be used at the apex. In-form Raheem Sterling can be used a second striker alongside Balotelli. Last time when Liverpool played with a mobile forward upfront alongside Balotelli, the Reds won 4-0 at White Hart Lane against Spurs. Sterling though is not a proper striker but the youngster has the tactical understanding to operate in that role. Most importantly, there’s no harm in trying a new method. 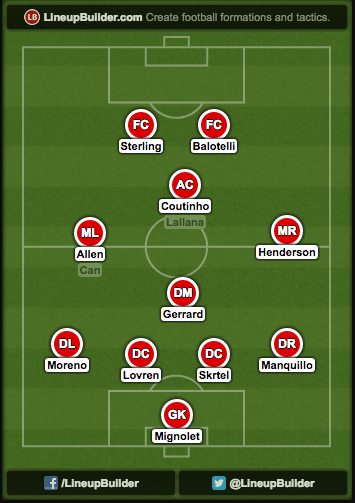 Alternatively, Liverpool can use an attacking 4-3-3 system that Carragher spoke about on Monday Night Football. Allen and Henderson could be asked to press throughout the match allowing less time for Kroos and Modric to dictate the tempo of the game. In such a scenario, Sterling could be used as a lone striker but in the false #9 mode. 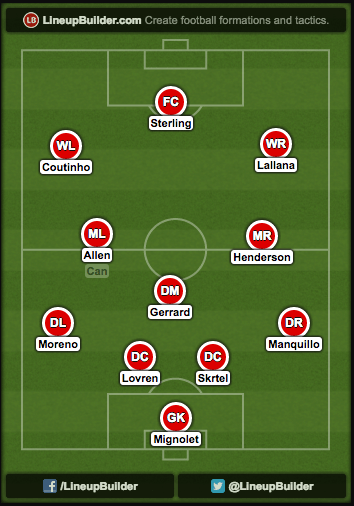 If Liverpool can get something from these two fixtures against Real Madrid, they will receive a massive boost ahead of their crunch clashes with Basle and Ludogorets. Having said that, Liverpool will have to raise their game tonight, as noted by Gerrard, else they could suffer a massive humiliation.