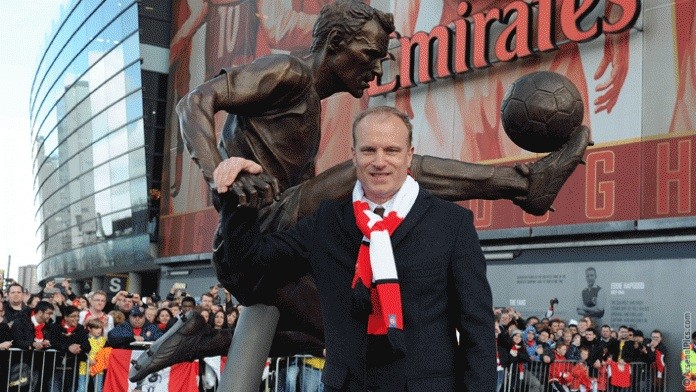 Today Arsenal honoured one of their greatest heroes of recent times when a statue of Denis Bergkamp was unveiled at the emirates stadium before the home game against Sunderland.

Bergkamp now employed back in his native Holland as a coach with his former club Ajax was in attendance and the fans gathered early to pay due regard to the striker.

The Dutchman was one of the most elegant players to have donned the Arsenal shirt and starred in probably one of the best of Wenger’s sides for the Gunners. Shouts of “Sign him up. Sign him up. Sign him up!” arose from the crowd as Bergkamp stepped forward, and with the possibility that the Dutchman could progress into management after he had served his coaching apprenticeship in Amsterdam, he would be a popular choice to replace Wenger when the Frenchman finally move on. Having Bergkamp sitting on the bench with Wenger moved upstairs to mentor and advise would be immensely popular.