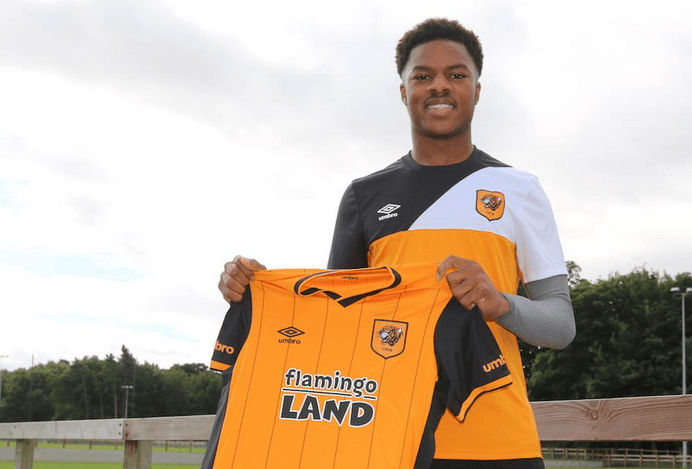 Arsenal striker Chuba Akpom has joined Championship side Hull City on a one-year loan deal, the Tigers have confirmed on their official website. The 19 year-old was expected to remain at the Emirates Stadium after impressing in pre-season, but Arsene Wenger has deemed it better for him to go to a club in the second-flight to gain more experience and gametime.

Akpom has been at Arsenal since the age of 7, joining the club in 2002. He broke into the first team in 2013 but has failed to establish himself yet, being sent on loan three times in the last 2 seasons. After failing to find the net even once at Brentford, Coventry City and Nottingham Forest, he will not try his luck at the KC Stadium.

Hull were relegated from the Premier League last year but Steven Bruce will be hoping to seal  quick return to the top flight. Akpom joins Isaac Hayden as a loanee from Arsenal, and the duo will look to play integral roles in the side.

Akpom’s loan though, comes as a slight surprise, after Wenger’s comments last month, following the 19 year-old’s impressive hattrick in a pre-season game in the Barclays Asia Trophy against the Singapore XI.

Following the match, the manager said, ‘I won’t send him on loan. I sent him out on loan last year. I thought he needed that.

‘This season no, I plan to keep him with us. It’s down to performance and attitude and he has enough of that way to be a big talent. And, after that, he has to be an efficient player week in, week out, that’s the target.

It’s down to him. This will give him encouragement to do well and work even harder. He’s a young player and it can lift confidence. The confidence you sense in the dressing room from other players is important as well. That can help you.’

Akpom becomes the third Arsenal striker to leave the club in the summer, with Lukas Podolski being sold to Galatasaray and Yaya Sanogo joining Ajax on loan. Olivier Giroud and Danny Welbeck are the only recognised strikers at Wenger’s disposal, but the Gunners go into the new season in really confident mood, following their win over Chelsea in the Community Shield on Sunday.