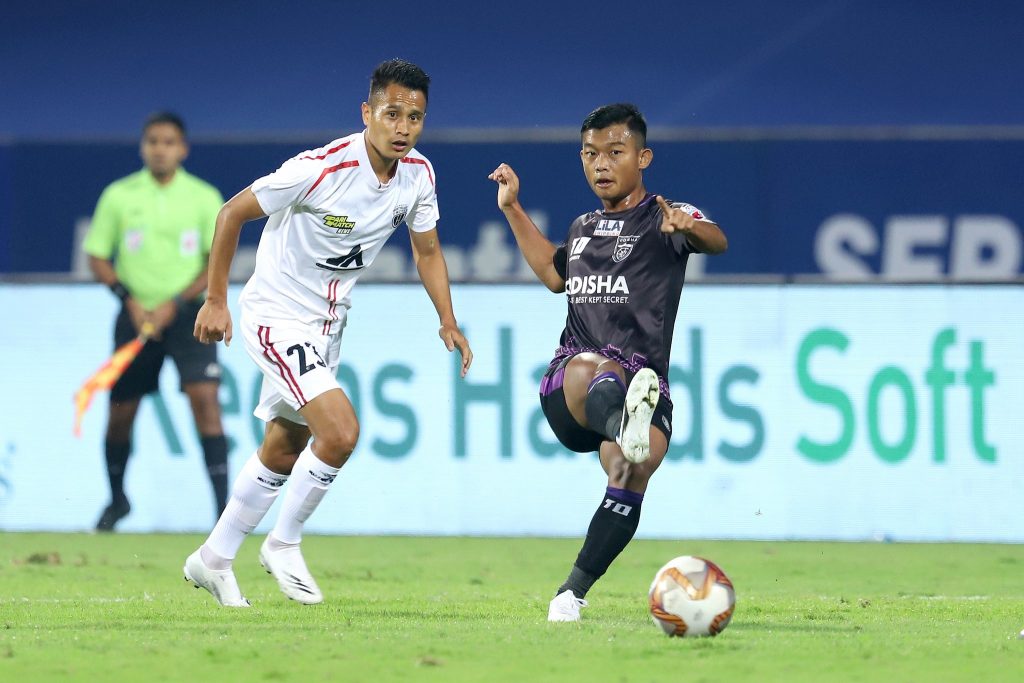 The second clash of the Indian Super League’s matchday 8 was quite an interesting one, as bottom-club Odisha FC faced NorthEast United, who were 4th in the table. Stuart Baxter’s men were still searching for their first win of the season and had lost each of their last four matches, and NorthEast weren’t too happy going into the match either having seen their unbeaten run come to an end last time out against Jamshedpur FC.

A tasty fixture was set to ensue, and here’s what we made of it:

NorthEast United came extremely close to opening the scoring when Kwesi Appiah brilliantly controlled a long ball from Federico Gallego and got there before the defender to fire a shot, but it was saved by the rushing Arshdeep Singh.

Eight minutes later at the other end, a free-kick caused all sorts of havoc in the NorthEast box. The ball fell to Diego Maurício at the edge of the six-yard box and he had two stabs at it, but the first was blocked by Gallego and the second was headed off the line by Dylan Fox. Hendry Antonay tried to find the net with the follow-up, but he hit the wrong side of it.

Odisha finally took the lead in the 23rd minute when Diego Maurício received a throw-in on the left, turned away to drive inside and found the near corner with a powerful (and deflected) finish. The assistant referee initially had his flag raised, but the matter was sorted and the goal stood.

NorthEast United had a good chance to equalise in the 38th minute when Federico Gallego’s free-kick reached Benjamin Lambot, but he failed to hit the target with his header. Three minutes later, Gallego sent a free-kick towards the bottom corner, but Arshdeep Singh was equal to it.

Finally, in first-half stoppage-time, a well-worked set-piece saw Ashutosh Mehta swing a ball towards the near post region for Benjamin Lambot, who made no mistake with his header this time.

There was a huge twist in the 64th minute when Luís Machado played Kwesi Appiah through on the left after a counterattack, and Arshdeep Singh brought him down before he could shoot. The Ghanaian striker stepped up to take it as well and he made no mistake as he smashed it past the keeper.

Just three minutes later, however, Cole Alexander picked up the ball inside the box and picked out the bottom corner with a curling finish which split the gap between a couple of defenders.

NorthEast were afforded a huge chance to score in the 69th minute when Jacob Tratt basically rolled the ball into Sylla’s path, but the substitute snatched his first-time effort wide.

Khassa Camara came off the bench after that, and he came extremely close to lighting the place up when his strike from a long distance just went over the crossbar in the 85th minute.

Still without a win despite some very strong showings, Stuart Baxter knew that it was about time that his side started converting performances into results.

Odisha FC weren’t exactly great in the first half, but they did have a couple of chances and took the lead through Diego Maurício. They were holding on in the final stages, defending set-piece after set-piece and typically conceding just before the break, meaning that Stuart Baxter’s planned team-talk went right out of the window once again.

Marcelinho didn’t start once again, so Odisha didn’t ooze creativity in any way. Even then, they battled hard in the second half and created a number of decent openings, but were punched back by a devastating counterattack. This is where the Kalinga Warriors showed great fight once again, as they quickly grabbed an equaliser and got the momentum to perhaps even grab a winner.

Ohh I really wanted a win tonight 😔 Solid performance by Gaurav Bora and Cole Alexander in the middle. As an Indian Football fan, this was a treat to watch. What are your thoughts @OdishaFC fans?

They couldn’t do that, and in the end, the substitutions indicated that Stuart Baxter was happy to walk away with a point after yet another spirited performance from his side.

As aforementioned, Marcelinho didn’t start tonight, and his warm-up was futile as well because we saw no sign of him being brought on.

This meant that Diego Maurício was the most experienced creative forward, and he did a great job of leading his side’s attacks. He missed a glorious chance after an uncleared free-kick broke for him, but the Brazilian winger made up for it by opening the scoring soon thereafter. He continued to influence his side’s actions in the final third, setting up Cole Alexander’s strike very cleverly to help his side to a point.

The ex-Flamengo man finished the match with a goal from 6 shots, 31 touches, 4 duels won and an assist.

Another reliable attacking display for his side.

Gerard Nus had said that losing wasn’t the worst thing in the world before his last match, but his opinion might have changed a bit after tasting defeat for the first time in India.

As ever, the Spanish tactician made a number of changes to his lineup, handing rare starts to Fanai Lalrempuia and Britto PM, while the likes of Idrissa Sylla and Khassa Camara missed out. A few other changes, including the return of Federico Gallego brought a change of system with them, as NorthEast United fielded a 4-3-3 instead of their more recognisable 4-4-2. This change in formation meant that the Highlanders weren’t as defensively solid as usual, and the match was a much more end-to-end affair (with a whopping 36 attempts in the end).

After conceding the opener, they had a number of glorious set-piece opportunities to equalise, and they finally succeeded just before half-time. Gerard Nus made a puzzling call a few minutes into the second half as he brought off the mightily impressive Federico Gallego, much to the midfielder’s disappointment. They did very well to take the lead in the second half in any case but quickly conceded after that to undo their good work.

In the game of 'could haves' and 'should haves', it's definitely 2 points dropped.

That didn’t take away at least a point from NorthEast United, though, who get back to non-losing ways with their 5th draw of the season.

Odisha FC move one place up to 10th on goal difference, while NorthEast United stay in 4th after conceding the 5th goal from outside the box for the season in the first half. Ashutosh Mehta celebrated his 50th ISL appearance by getting his second assist of the season for Benjamin Lambot’s first goal, while Odisha FC conceded the fourth penalty this season – more than any other team. Kwesi Appiah made up for his miss at the same end against Kerala Blasters, but Cole Alexander’s first ISL goal meant that the match ended in a draw.