With the World Cup 2018 to kick off on Thursday night, time is running down for you to join the Sportslens Predictor competition.

Run through Superbru, now is the chance for you to claim bragging rights and showcase your football knowledge ahead of the global spectacle in Russia.

In our predictor competition, you will be asked to predict scores in all the games, with 1 point for the correct result, 1.5 for being close to the correct score and 3 points for getting it completely right.

If you change your mind you can alter your predictions up until close to kick-off and the competition is available through the Superbru app. 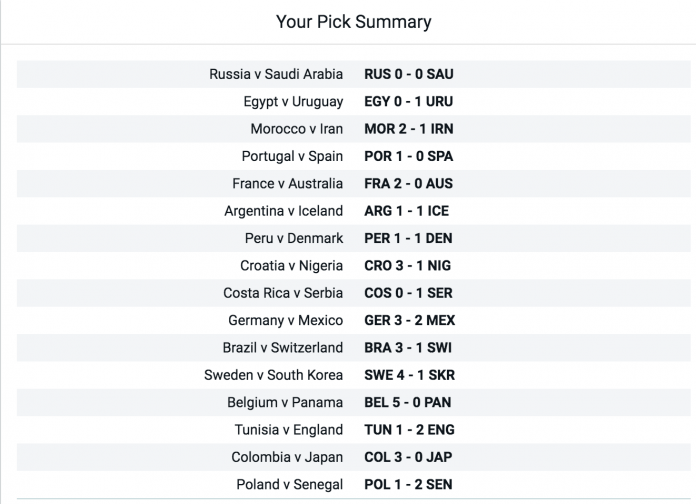 Eyeing up the first set of fixtures, there are a number of games that are hard to predict.

When looking at the opening fixture between Russia and Saudi Arabia, not too many people are expecting a glut of goals or much excitement between two of the poorer teams in the competition – as such I’ve tipped a 0-0 draw.

The first high-profile sees Iberian rivals Spain and Portugal come to blows on Friday night, fresh from news that Julen Lopetegui has been sacked by the 2010 champions the day before the competition starts.

As such, Spain may well be shaken up by the change in coaching structure – as such I’m backing a 1-0 Portugal win – there is always an early shock result at World Cups.

I’ve selected France, Uruguay, Croatia, Germany and Brazil all to win in their opening games, but think Iceland could scrape a 1-1 draw against Argentina.

Looking at England’s opener against Tunisia, I don’t think Gareth Southgate’s men will have it all their own way and the North Africans may well score.

But, my tip is a 2-1 win in a less-than-vintage performance for the Three Lions.

Group H looks set to be one of the most-competitive pools and I have backed an underdog to win in one of the opening games.

While Poland will be fancied to beat Senegal, I think the unpredictability of the African nation could see them beat the eastern Europeans 2-1 in Moscow – with Sadio Mane the star.

Enjoy the start of the World Cup and get those predictions in!