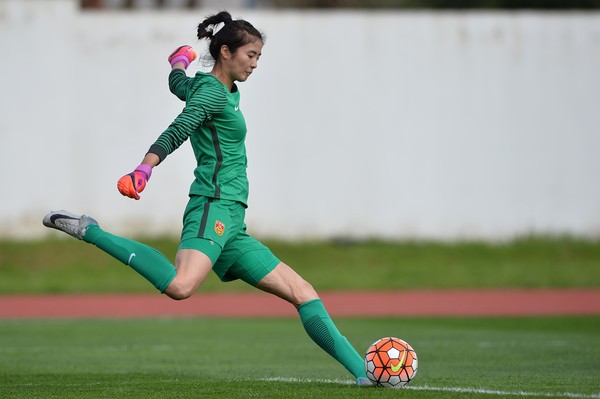 Despite the tremendous popularity of women’s football in the US, the female game around the world is dwarfed by the men’s version, and this brings a unique set of challenges for the players.

Whether it’s breaking traditional gender roles in society or struggling with the pressures and expectations of being role models, women footballers have faced plenty of challenges – and have handled them admirably well.

Here’s our look at three such examples:

Chinese women’s football goalkeeper Zhao Lina once turned down an opportunity to become a catwalk model.

The 6ft 2in stopper towers over many of her teammates and she caught the eye of a modelling agency who saw beyond her footballing ability. In a video interview with the International Olympic Committee’s OlympicChannel.com, Zhao explained that she seriously considered a career move, going as far as to visit some modelling companies.

However, she has decided to stick with her footballing career to help financially support her parents and assist the bid to grow women’s football in China.

Nicknamed the Steel Roses, China’s women’s team have won the Asian Cup eight times, coming third in the 2018 edition last month, and have qualified for the World Cup in France next year.

Abby Wambach’s fall from grace was spectacular, but she is now using her experiences to inspire the next generation of women’s sports stars.

The current leading scorer in the history of women’s international soccer, Wambach retired in 2015.

The following year, her mugshot was plastered over the internet following a 2016 DUI arrest and she subsequently admitted to having a long battle with depression and addiction.

She has now made it her mission to ensure that all people feel like they have the same rights as anybody else and is an activist for equality in women’s sports.

Akers turns her attention to the equine world

Michelle Akers is argued by many people to be the greatest female footballer in US history.

After retiring from soccer in 2000 following a career that saw her score 105 goals in 153 games, win two World Cups and an Olympic gold medal, she channelled much of her energy into the Michelle Akers Horse Rescue Farm.

Within a month of moving to the farm in 2009, the Atlanta area experienced unprecedented rain and flooding, causing major damage to Akers’ new venture.

She sold most of her footballing memorabilia to fund the rebuilding process which was completed at the end of 2016.