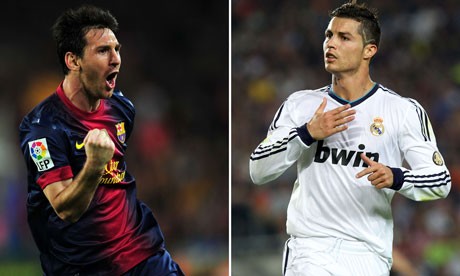 Pele did it on more than one occasion. Maradona had a great one, a mediocre one and then an embarrassing one. Johan Cruyff had a couple of really good ones, unveiled a ‘turn’ in one that still carries his name, but was ultimately unfulfilled. Bobby Charlton made his name at one, as did Geoff Hurst. George Best and Ryan Giggs never had the chance to have one. What am I talking about? It’s having a World Cup tournament that defines you as one of the best players to have ever played the game.  So, will 2014 be the tournament where Messi or Ronaldo prove their credentials on the biggest stage of all?

For the past few years, despite a few arguments from Zlaten Ibrahimovic, and and a few others, the best player on the planet accolade has very much been a bit of a personal duel between Lionel Messi and Cristiano Ronaldo. playing in La Liga for Barcelona and Real Madrid respectively, these two have gone toe-to-toe, slugging it out in a Spanish goal fest to claim their places in the Parthenon of the best players ever to have kicked a ball. As yet however, both have come up short in the biggest tournament of all, the World Cup. this is the occasion where the world’s best, meet and to claim a place alongside Pele,  Cruyff, Maradona et al you need to play the big game on the biggest stage. until they do, their fame and glory will always be in question when compared to the hierarchy of football greats.

In fairness, Ronaldo has the handicap of being a world star in a fairly average Portugal team. After all, the Real Madrid star’s appearance in the tournament was only assured after a virtuoso performance in a play-off with  Ibrahimovic’s Sweden. Messi has no such excuse. With the likes of Aguero, Tevez and Di Maria to choose from as a supporting cast, the pocket-sized maestro will not want for attacking assistance. Being in South America as well, perhaps this is Messi’s chance to stake his claim.

Brazil 2014 promises many great spectacles, but if either Messi or Ronaldo take centre stage and claim the tournament as their own, it may be time to exalt one of them in the highest regard  alongside the all time greats.