They’re a fickle sort, the Football Association. 18 games into a four-year contract, Steve McLaren was dismissed following his failure to qualify for Euro 2008.

While fickle, I have to say I totally agree with the FA’s decision. This time. The fact is that McLaren never should have been appointed in the first place. A fine number two he may be, but the amount of times he looked entirely out of his depth tactically and his total failure to control the immense egos of some of the side’s supposed superstars made England rather hilarious to watch at times.

Unless of course, you’re an England fan. As a Scot, I have to say I feel sorry for the Auld Enemy. Scotland’s last two managers have done such a good job that big club sides have came knocking and stolen them away. England’s last two managers have been terminated after a series of failures, or in Sven Goran Eriksson‘s case, apparent failures. Personally I think three consecutive quarter-finals appearances is not a bad record – especially compared to McLaren’s.

But who knows, perhaps McLaren will now go on to emulate Eriksson’s post-England success and a year from now the fans and press will be calling for him to be reinstated. That both sections, albeit in their minority, have called for Eriksson to be offered the job again is laughable. This would be comparable to the Scottish press starting a campaign to have Berti Vogts installed as Alex McLeish’s successor. 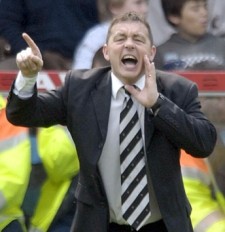 Scotland, however, have a number of native managers perfectly capable of taking the job. Billy Davies anyone? Recently sacked from Derby County, he’s a free agent. I for one wouldn’t mind to see him take the job.

But seriously, who in their right mind would take the England job these days? That the only serious contenders at the moment seem to be Fabio Capello, a man who doesn’t speak English, and Harry Redknapp, one of the most famous ‘wheeler-dealer’ managers the game has ever seen and therefore clearly more suited to club management, shows that the FA really don’t have many options that look much better than what they once had in Sven.

The debate over whether to hire an English or foreign coach seems ridiculous. Look no further than how things ended up with their last English coach and it should prove that it doesn’t matter where you’re from – the only thing that matters is the ability to do the job.

My ideal candidate? José Mourinho. At least it would be entertaining. But not only that, Mourinho is one of the finest managers currently out of the game – or indeed in the game. He hasn’t said too much about it, but I feel if the FA made a serious offer, he’d at least consider it.

Mourinho’s tactical nous is far superior to that of McLaren’s, his motivational skills are excellent, and unlike McLaren, he wouldn’t bow to the popular public opinion. McLaren was more than happy to change formations for the first match against Croatia after pressure from the press, and was also happy to put Scott Carson in goal for the crucial second match against the Croats, despite having two goalkeepers with experience of playing at a major tournament in David James and Paul Robinson. Mourinho on the other hand, was so determined not to have his chairman dictate the squad selections at Chelsea that he eventually lost his job.

Isn’t that the kind of man the English side needs? Not to mention that Mourinho has the ability to beat down even the biggest of egos – after all, nobody in the dressing room should be more full of themselves than him.

As more and more people continue to rule themselves out for the position, it’s time the FA put their money where their mouth is and go after the best man for the job – whether they’ve claimed they want the job or not.