This website has been highly critical of Steve McClaren’s credentials to manage England – with that in mind, it’s interesting to take a look back at my weekend romp with FM 08 and look at what it takes to manage England.

The charges leveled against Steve McClaren (and against his predecessor, Sven Goran Eriksson), are as follows:

Let’s start with these (and lump England’s inability to use possession instead of wasting it with tactical ineptness).

It’s surprising that Steve McClaren has not been able to get England working properly on the basics – keeping the ball, moving forward with it, attacking as a unit, discipline in defence, etc etc. The main gripe has been that the talent coming through the ranks in England is not good enough, but quite honestly even crap players can be adequate if they’re given the right training.

England’s performances, at times, are woefully inadequate. Part of that is mental and another part is team selection – I’ll tackle both in a bit – but sometimes simple tactics can mean the difference between winning 2-0 and losing 1-2 in Moscow.

England’s performances against Macedonia and Israel away were precursors to how England played against an opponent who was comfortable on the pitch and ready for a fight. Against settled teams, England’s nervousness shines through. While it was embarrassing to see England lose 0-2 to Croatia (a 1-1 or 0-1 result barring that freak own-goal), they probably played better that day than England have against Macedonia or Israel away from home.

Joe Cole – misused. Wayne Rooney – misused. Emile Heskey – falsely congratulated for Russia’s mistakes (they didn’t repeat them in Moscow, mind you – Hiddink learns). Paul Robinson – his inability to learn is fascinating and sad at the same time (he’s a decent keeper though, just shot of confidence). Steven Gerrard – needs to provide results instead of efforts. Michael Carrick – misused and to an extent, not first-choice in any case for England. Barry – again, lauded for his performance in easy games, but fundamentally not used right against Russia.

At the start of England management career, I sympathised with Macca, thinking that it was difficult to arrive at the right tactics and that perhaps, England just weren’t good enough. But I’m a beginner – Macca has learned from one of the best (Sir Alex Ferguson) and has been in management for a long time now. He’s had far more time to hone his management skills. And yet the words that sting the most are Hiddink’s tongue-in-cheek comment that England were tactically naive, because we know it’s true.

The substitutions at Moscow were damning – Downing and Lampard are workhorses, not impact players. Joe Cole, on the other hand, is an impact player. Hell, Theo Walcott is an impact player (for those who remember World Cup 2006). Why bring Downing on for Cole when you could have started with Downing, worn down the defenders with his width and pace and then brought on Cole to cut and weave inside? 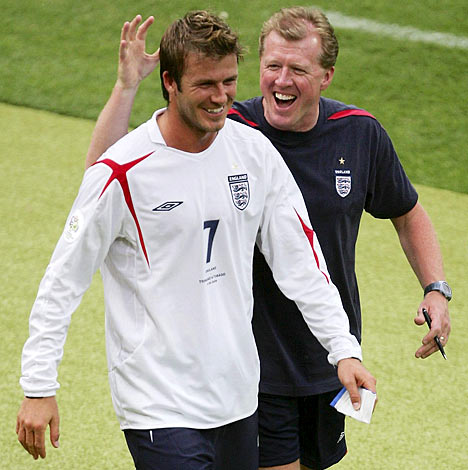 When I was losing my early matches in FM 08, the urge to bring on Frank Lampard for Owen Hargreaves and Michael Owen for Dean Ashton (and indeed, Joe Cole for Stewart Downing) was overwhelming. I sympathise with Eriksson and Macca when they repeatedly pick players who clearly do not fit into the system. Michael Owen, for example, is an excellent player and fully capable of playing together with Wayne Rooney, but to use the two properly you need specific tactics, which change immediately if Rooney or Owen are paired with Crouch / Ashton / Bent.

Within England’s tactically naive structure, pairing Rooney and Owen is a wild throw of the dice. It’s easier to follow the big man – little man strategy for Macca because it requires less fine-tuning.

For Lampard – the discussions on how Lamps / Gerrard cannot play in the same central midfield have been done to death, so no repeats here.

For Joe Cole – explain to me the purpose of playing an attacking midfielder on left wing who refuses to play in his position and therefore forces his left back (the admirable Ashley Cole) to do the work of two men?

Why do England coaches pick center-backs for full-back positions? Carragher ended his career because of this (a stupid move) and at any rate, Lescott, despite his history as playing as a left-back, is NOT a Micah Richards on the wings. With Leighton Baines doing so good for Everton, why not pick him? A genuine left-back matched with a genuine left-winger (Downing, not Cole) could have made a world of difference. As it were, England’s left flank was weak as always and Hiddink exploited it with ease.

England have no defensive midfielders apart from Carrick and Hargreaves, it seems. Reo-Coker is what, too black to play with Gerrard? Sissoko isn’t, so there must be a different reason, but the fact that I had to say this signifies something deeper – where are the players England needs?

To be honest, England are NOT that good as they lead themselves to believe. Hargreaves and Carrick are not better than Gattuso, not today and not in any fantasy world that you or I live in. And yet those two are the best defensive midfielders we have, so the question then is, what does Steve McClaren do? Does he thrust someone unknown into the mix or go with the tried and trusted, as Eriksson did with Lampard and Macca did with Barry?

Playing FM 08, I realise that England aren’t that good. I also realised that the temptation to go with experience is great, and while the risk of defeat in my case was balanced by saved games, Macca has no such fall-back options.

England’s failures then can be attributed directly to Steve McClaren being caught dead in the proverbial on-coming headlights and freezing. He’s afraid to take risks and make mistakes, so he’s going (more or less) with what is safe and thanks to his tactical naivety, England are suffering.

But remember, England are not as good as we think, and Macca is under tremendous amounts of pressure. For this alone I respect him more than when I did last week, before England had lost to Russia.

My assistant manager in FM 08 who takes charge of team talks cites ‘fans’ as a never-failing motivator for players. It’s useful, perhaps, but I wonder what it takes for someone to motivate his players? SAF does it, Wenger does it, Mourinho did it, and Rafa does it for big occasions.

A big chunk of football management is about extracting 100% from the players available to you. That, combined with tactical aptitude allowed Mourinho to win the Champions League with Porto. That same combination allowed Hiddink to beat England in Moscow (with below-average players).

McClaren – from his days at Middlesbrough and his time with England – is not getting the best out of his players. You need a ball-buster, someone the players look up and respect. I’m not going out on a limb here when I say that Martin O’Neill would command more respect than Steve McClaren and while Steve Coppell probably wouldn’t, he’d earn it in the dressing room. Can Macca? I’m sure they ‘respect’ him, but there’s a difference between how players respect Fergie and Mourinho and how they respect Macca.

To sum it up, FM 08 is a kickass game 🙂 And England’s problems can be summed up like this: