Arsenal have the opportunity to leapfrog West Ham and potentially move into the top four with a win at West Ham tomorrow.

The Gunners were 2-1 winners over Queens Park Rangers on Friday despite playing most of the second half with 10 men.

West Ham were comfortably beaten at Chelsea and dropped out of the top four following Southampton’s win at Crystal Palace.

Carl Jenkinson is ineligible to face his parent club whilst James Tomkins is the only other absentee for Sam Allardyce’s side.

Arsène Wenger doesn’t have the luxury of a near-fully fit and available squad.

Olivier Giroud starts the first of a three-match ban for his headbutt on Nedum Onuoha yesterday.

Laurent Koscielny has an outside chance of recovering from his calf injury to suit up for this game. 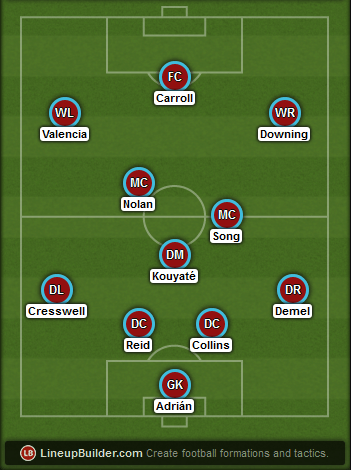 Guy Demel in for Carl Jenkinson at right-back and the rest of the defence remains the same. Alex Song made an unconvincing second half appearance versus Chelsea but we think he’ll start this one as Mark Noble looked awful in their last game. Enner Valencia should be a good outlet down the left wing and Stewart Downing has been in form down the right. Andy Carroll remains the target man. 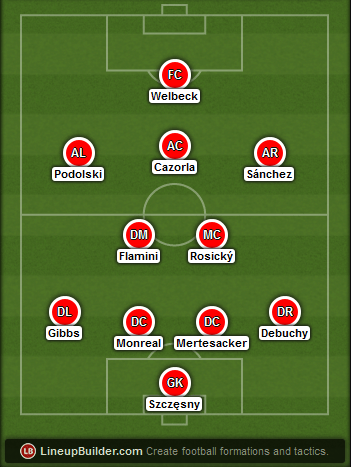 Olivier Giroud’s suspension should see Danny Welbeck move back up front, although Yaya Sanogo is an alternative option. We see Lukas Podolski coming back into the team to play on the left to keep the in-form Santi Cazorla in the middle. The back four remains the same that QPR failed to create anything again in open play, although Calum Chambers could replace Nacho Monreal.

Alexis Sánchez vs Aaron Cresswell
Aaron Cresswell has had a decent start to Premier League life but we don’t see him being a match for Alexis Sánchez who scored his 10th league goal of the season on Boxing Day. The Chilean has been Arsenal’s key player in many games this season and we see him causing this West Ham defence a lot of problems on Sunday.

Santi Cazorla vs Alex Song
Alex Song was careless in possession at the weekend whilst Santi Cazorla has been winning the ball back for his side on several occasions when playing in the middle. The Spaniard has also been amongst the goals of late and creates chances too. As a result we see him being a key player in this game.

Stewart Downing vs Kieran Gibbs
Stewart Downing has been a key player for West Ham in the first half of the season and could fair well against the makeshift Arsenal defence that we expect to have two left-backs playing. The England international had a quiet game versus Chelsea but with his ability to cut in from the right and cause defences problems on the counter-attack we think he has a good chance of making a notable performance in this one.

Prediction: West Ham 1-2 Arsenal
Arsenal’s lack of rotation options because of injury may very well catch up with them soon but we think they’re capable of getting a good result in this game. The pace and flair they have against the West Ham defence is a good matchup and they have match winners in Alexis Sánchez, Santi Cazorla and Lukas Podolski to get them the three points in their final game of 2014.