West Ham United have announced that their kits will bear the logo of adidas again after a gap of 26 years – coincidentally, almost as long as Alex Ferguson was the manager of Manchester United.

The deal will come in effect on June 1st, 2013. The current agreement will run through to the 2014-15 season. West Ham’s current kit manufacturers are Macron, who took over from Umbro in 2010.

The Hammers started wearing adidas in 1980, when the German manufacturers took over from Admiral. The last time West Ham wore the iconic three-striped shirt was in 1987 and since then they have changed seven kit manufacturers.

In the 1980-87 era, West Ham enjoyed some successful times. They reached the best ever Premier League finish of third in 1986 and earlier in 1981, they played the League Cup final against Liverpool – after a 1-1 draw at Wembley, the Reds won 2-1 in the replay at Villa Park.

West Ham legends like Billy Bonds, Sir Trevor Brooking and Tony Cottee have worn the three-striped shirt in the past. The Hammers sit mid-table and the new deal will help them generate some cash to make the push into the upper half of the table.

“We are delighted to team up with adidas at such an exciting time in the club’s history.

“The agreement with a world-famous sports brand provider is another signifier of our Club’s growing global standing.

“adidas is a brand that West Ham United have a proud association with and we are looking forward to creating many more glorious memories playing in the famous three stripes.”

“To partner with West Ham United again, considering there has been such an iconic past relationship, meant that there was genuine excitement from both parties as we agreed the deal.

“adidas is confident the Hammers fans will truly appreciate the quality and design of the new kits and extended ranges and we wish the club every continued success on pitch for the coming seasons.”

Macron is an Italian sportswear company. Their CEO, Gianluca Pavanello, was quoted on West Ham’s official site as saying:

“We would very much like to thank West Ham United FC, as we have very much enjoyed a great relationship with the West Ham family over these past three years, where we feel both brands have received international exposure.

“We very much enjoyed producing each season’s bespoke kit and to everyone at the club with whom we have had the privilege of working. We wish them every success for the future.”

The designs for the new adidas West Ham shirt will be revealed over the summer. 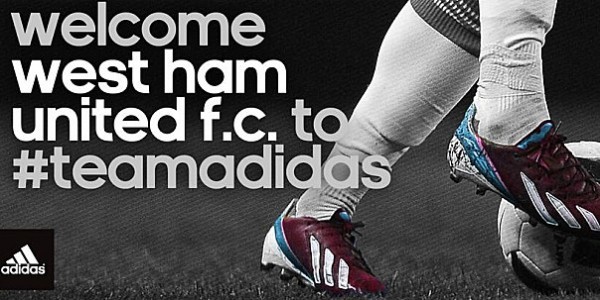