We had mentioned that Arsenal manager Arsene Wenger personally made a phone call to Rabiot’s mother to convince her that the Gunners was the most suitable destination for her son. 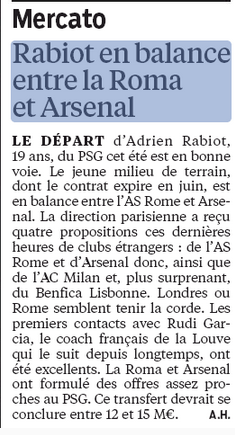 Le 10 Sport have come up with a story this morning that PSG are resigned to the fact they will have to sell the wonderkid this summer rather than lose him on a free when the contract expires next summer.

Moreover, PSG will now have to sell their prized asset for just a figure between €12m-€15m which is half the money of their evaluation of the player. The credit definitely goes at Wenger who has the knack of snapping up a French kid and then making him the next best thing in world football.

The snippet from Le Parisien also suggests that Arsenal are in the driving seat to sign the player despite significant interest from Tottenham and Italia Giants Roma.

It is believed that Wenger has a great relation with PSG’s President and it could mean that Arsenal can sign the midfielder for just €12m. Thats what you call a bargain.