Arsene Wenger accepts that his new centre-forward Danny Welbeck has tremendous potentials to be a top quality striker, but at the same time he admits the comparison with club legend Thierry Henry is too premature.

Welbeck opened his goal scoring account for Arsenal against Aston Villa on Saturday, a game the Gunners comfortably won 3-0 at the Villa Park. 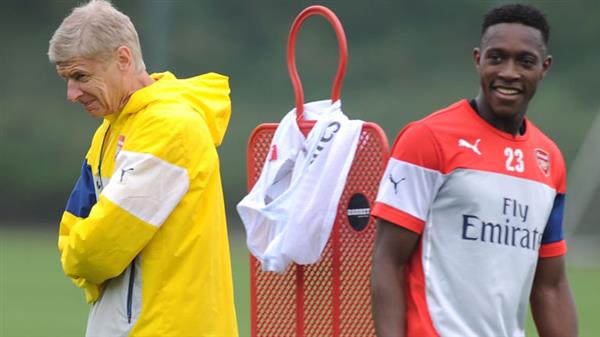 Henry, a winger back then, was signed by Wenger in 1999 from Juventus, and the Arsenal manager transformed him into a striker at Arsenal. And as they say; the rest is history. Henry scored 228 goals for the Gunners and won five trophies during his eight years’ stay at the North London club.

Welbeck, on the other hand, is a technically strong modern striker who contributes lot more to the game through overall involvement.

“Look, give me some time,” Wenger said when asked whether he could do the same with Welbeck as he did with Henry. “It is a bit early to say that when you look at the number of goals Thierry Henry scored.

“I think [Welbeck] has an interesting potential and let’s see how he develops. He has a good mentality, good physical potential, good technical potential, he contributes to our team play because he doesn’t lose the ball up front and those are important qualities. [Henry] is a good act to follow, you know … I have nothing against it.”

Despite all his brilliances, Welbeck is often heavily criticised for his poor finishing. Last week, he received strong criticisms again for missing several clear-cut chances against Borussia Dortmund in the Champions League.

Wenger, rightly defending his player, said that Welbeck’s missed chances were due to a “nervous problem”, as he hardly played as a centre-forward for his previous club.

“He is a good finisher. I think as well he has played at Manchester United in the position wide for the last two or three years, never through the middle. Then you lose a little bit of that instinct to score … which is a little animalistic. You need to always be in the middle and wait for your chance to kill the opponent. On the flank you have less of that responsibility.”

Welbeck has a long way to go from here, first, he needs to establish himself as a top striker; second, a cult figure at his new club – following the footsteps of Henry won’t do any harm to his progress.