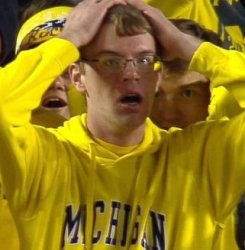 It was the game that gave us possibly the most well-known college football surrender cobra (headline picture) of all time, the battle for the Paul Bunyan Trophy. Of course, it is Michigan State versus Michigan in a Big Ten East battle for the ages. The rivalry spans back over a century, but Michigan will be hopeful of putting an end to the Spartans’ two-game winning streak this year. We take a look at the odds and offer our picks and predictions for this massive week nine NCAA football encounter.

The undefeated Michigan Wolverines host rivals Michigan State on Saturday as the Spartans try to play spoiler in Michigan’s CFP bid. Michigan are currently 7-0 and the fourth ranked team in college football. Fresh off a bye, the Wolverines will be keen to assert their dominance over their rivals and keep the bid for a playoff place alive.

Sportsbooks believe Michigan are a shoo-in for this one. They are massive odds on favorites on the moneyline while giving up 22.5 points on the spread. The total points line for the game is set at a reasonable 55 points.

The 3-4 Michigan State Spartans stopped the rot with an overtime win over Wisconsin last time out. Prior to that, they were on a four-game losing streak and struggling to get anything going. Fresh off a bye, like their opponents, the Spartans will be seeking to pull off a massive upset, but they always step up their game in the battle for the Paul Runyan Trophy.

Heart. It’s as simple as that, really. Michigan State is going to have to play with a whole lot of heart if they are to get close to Michigan on Saturday. The talent gap is a little much to overcome without it.

The matchups for the Spartans are ugly regardless of where you look. Michigan will likely look to running back Blake Corum to lead the attack again. Corum is an absolute unit and he leads the NCAA in rushing touchdowns so far this year.

Michigan QB JJ McCarthy (pictured above) will also be pleased to see the matchups for his wide receivers are positive too. Wherever we look on this side of the ball, it is all Wolverines.

However, the one area we can’t account for is what’s inside the chest of those Spartan players. That has the ability to blow up the algorithms and models of the greatest gambler.

That’s what a MSU fan would say anyway, we are not buying it. It is going to be tough for them to move the ball on this Wolverines unit and they won’t stop them all day. Load up on Michigan and let’s go.