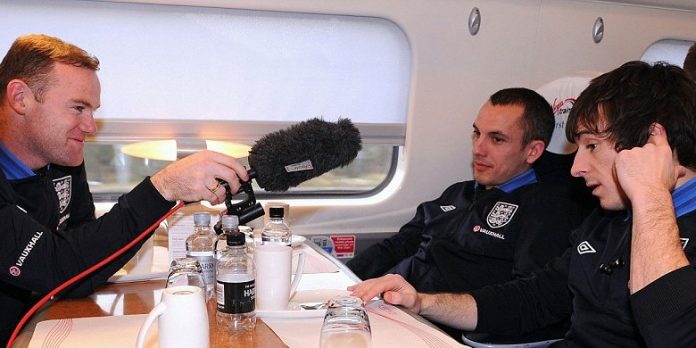 Ahead of the big friendly game against Brazil, Rooney shows off his interviewing skills as he talks to fullback Leighton Baines and his former Everton teammate Leon Osman.

England are playing their first international fixture of 2013 at the Wembley Stadium. The Brazil game is the first of a series of fixtures to celebrate 150 years of the English FA. Although only pride is at stake, it is an important fixture nonetheless.

The importance of the fixture makes it tough for the Everton duo to be selected. Baines faces competition from Chelsea left-back Ashley Cole, who is set to become only the seventh Englishman to earn 100 caps for the Three Lions.

Osman got his first cap for England in November 2012. He played the full 90 minutes in the 4-2 defeat at the hands of the Ibra XI – Sweden. If selected, it will be Osman’s debuted appearance at the Wembley.

Wayne Rooney can have a new strike partner if manager Roy Hodgson decides to play Arsenal’s Theo Walcott with him ahead of Danny Welbeck or Wilfried Zaha.