You crumble down of course and collapse like a house built of cards. And Villarreal were no exception. Immediate to their UEFA Champions League semi-final defeat to Arsenal in the 2005-2006 season, this small club from the city of Vila-real to the south of Valencia with a population half the size of the crowd capacity at Camp Nou suffered a meltdown. They finished 7th that year and in the first half of last season sank perilously close to the relegation zone.

All because the form of a certain Juan Roman Riquleme on whom Villarreal coach Manuel Pellegrini had relied on so heavily withered into ashes. So much so that Pellegrini and club president Fernando Roig Alfonso got tired of him and his persistent flirtation with poor form and thought that a new dawn ought to be dragged out of the night.

And that’s what they’ve done. Villarreal have been emancipated by the departure of the Argentine enigma and are no more a Juan-man army. They are a team with more harmony, better understanding and no chasm in the dressing room. The Yellow Submarine are fifth in La Liga at the moment with 32 points from 18 matches. The Argentine press might have chaffed Pellegrini for consistently ignoring Riquelme but the Chilean knows his mind and how Villarreal have benefited!

Manuel Pellegrini is leading the team off the pitch. No one doubts that the architect of this new look Villarreal team is the 54-year old former River Plate coach. When the Riquelme element was subtracted from the equation, Pellegrini’s side did have a free fall like a teenager unable to cope with a break-up. But like the teen that gradually reinvents himself, Pellegrini dragged the team by its hair and pulled it by the legs. Last season Villarreal finished 5th but the best part of that tale is the setting of a new end-of-season record in La Liga with 8 successive victories.

They’ve picked up the thread from where they left off last season. Italian-American striker Guissepe Rossi has scored 7 goals already in the league this season with his Turkish strike mate Nihat Kahveci netting one more than him. Marcos Senna is as consistent as ever in central midfield, Joan Capdevilla is back to his best at left back and Matias Fernandez, signed from Colo Colo in January last year is gradually settling into life in Spain. 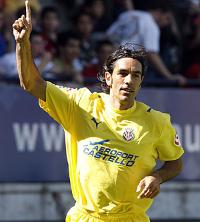 But the man who has been most helpful in enabling Villarreal gallop out of the Riquelme shadows is Robert Pires. The Frenchman missed most of last season with a knee injury but this season the 34-year old former Arsenal darling with flatfeet and a stride that (seemingly) comes nowhere near a run has filled in the large, yawning boots of Riquelme. It was Pires who destroyed Barcelona in October just as he had done six months back. In 15 starts this season, Pires might have registered just one goal and 2 assists but the statistics fail to capture the contribution that Pires has made in making Villarreal pleasing to the eye.

The only complain against Villarreal so far this season is their inconsistency. They’ve already lost 6 league games this season and that implies 18 points lost. Villarreal have won just 1 of their last 5 matches and lost 3 and their defense needs a thorough shakeup after a dismal record of conceding 1.50 goals per game. They lost back-to-back league fixtures against relegation contenders Valladolid and Real Betis in December and the poor form has outstretched its ugly hands to the New Year too.

Villarreal were all over the place at the Montjuic as a ruthlessly rampant Espanyol side ran them ragged on Saturday. The Yellow Submarine sank down 3-0 even after a two-week hibernation. The entire team was in shambles except Rossi who did manage to emerge out of the mess with some credit. Such defeats need to be ceased in the second half of the season and Pellegrini must also try and shore up that defense a little bit.

The beauty of La Liga, besides its aesthetic football and morbo, is the congested traffic in all parts of the table. Villarreal might be the fifth but two defeats in a row could easily put them out of a UEFA Cup spot, or, two wins could lift them into second (depending on results elsewhere in the Spanish first division). Trust Manuel Pellegrini: he will surely be gunning for that second option.