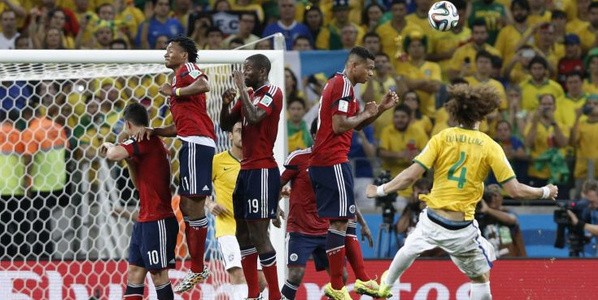 Brazil secured passage to the last four with a hard-fought 2-1 win against Colombia in Fortaleza, with former Chelsea defender David Luiz scoring a superb long-range free-kick in the second half to see the Selecao home safely.

Luiz, 27, struck the ball sweetly with his right instep from miles out, with the ball arching over the despairing dive of Colombia keeper David Ospina to give Brazil a two goal cushion, and despite James Rodriguez scoring his sixth goal of the tournament from the spot with ten to go, Brazil held on to set up a mouth-watering semi-final clash against Germany.

Check out David Luiz’s free-kick below, with PSG fans surely excited to see the Brazilian at the Parc de Princes next season:

What do you think? Is it the goal of the tournament so far? Let me know your thoughts in the comments below…