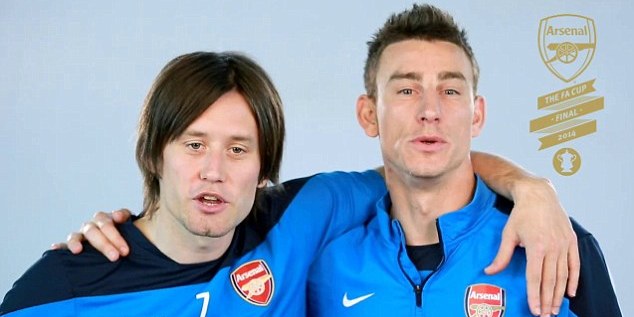 Kids these days want to be two things when growing up: a footballer, or a singer. While such a small percentage of youngsters achieve their dream, not one kid grows up to be BOTH, and judging by Arsenal’s ‘singing footballers’ video, we can only pray that One Direction’s occasional dabbling in the beautiful game remains the only slight exception to the rule.

To crank up the volume ahead of their FA Cup final showdown with Hull City later this month, Arsenal (or someone woefully affiliated) thought it fun to gather together some of their best known stars for a little sing-song, and perform a rousing rendition of the famous Arsenal chant ‘She wore a yellow ribbon’.

Alex Oxlade-Chamberlain, Tomas Rosicky and Laurent Koscielny are just some of the player to have got involved, with our favourite moment coming courtesy of the static Bacary Sagna, who exudes as much excitement and charisma as a wet paper hat.

Check out the clip below:

We all love a bit of personality from our heroes, and while it’s certainly cringe-worthy, its sure to get the Arsenal fans chuckling, with only ten days to go til the big day at Wembley!

What do you think? Who has the best singing voice in the Arsenal troupe? Get involved in the comments below…