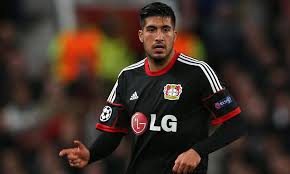 Liverpool have confirmed they have reached an agreement in principal with Bayer Leverkusen for their midfielder Emre Can, subject to documentation being completed.

The Reds have already secured the services of Rickie Lambert from Southampton earlier this week. The 20-year-old midfielder’s in Brendan Rodgers’ second acquisition of this summer as the Merseyside club look to strengthen their squad to meet the demands of the Champions League.

Meanwhile, Liverpool’s arch-rivals Manchester United are not in the Europe’s elite club competition and at the same time they have not made any signings so far. United fans shared their frustration after the news broke that the Reds have confirmed Can’s services.

Liverpool showing United chief Ed Woodward that transfers can be done early in the summer. Emre Can signed from Bayer Leverkusen #LFC #MUFC

So Now Costa to Chelsea, Emre Can to Livepool?What about Manchester United???#mufc

What a talent Liverpool have signed in Emre Can! Utd are pathetic, can't sign any1 & they need to improve their mediocre squad more! #mufc

So LFC finally made the UCL.. made us thinking they would sign top stars. Only for them to sign Lambert and now Emre Can. #lfc #mufc