Manchester United are preparing a €53m offer for Fàbregas, according to reports in Spain.

Manchester United are long term admirers of the ex-Arsenal captain and were heavily linked with Cesc Fabregas last summer but failed to pull off a deal. Van Gaal is now preparing a €53m bid for the Spanish international, according to Spanish newspaper Sport. Sport also add that the decision to sell Fabregas depends on the new Barcelona boss Luis Enrique. 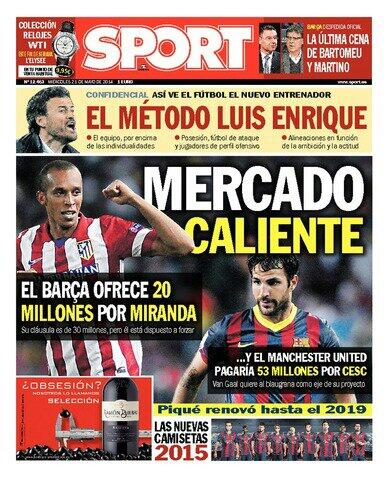 According to very reliable Guillem Balague , Barcelona are looking to sell the ex-Arsenal skipper along with the likes of Pedro and Alexis Sanchez who are surplus to requirements, but he insists that Fabregas has a buy-out clause in his contract for €40 million.

List of players that the club will listen for offers (doesn’t mean they are going for sure): Cesc, Alves, Adriano, Alexis, Mascherano, Pedro

Louis van Gaal was announced as the new Manchester United manager this week, with the Netherlands boss signing a three-year deal to replace David Moyes. The Netherland boss now faces a daunting task of bringing the club back to the top, with several players leaving Old Trafford, including the likes of Nemanja Vidic, Patrice Evra, Rio Ferdinand and Ryan Giggs, he needs to sign the correct players to replace them.

Van Gaal has been given a transfer kitty reported to be £150 to £200 million to invest this summer to help United win back the league title at the first attempt. It remains to be seen whether the new boss will spend a major chunk of the transfer kitty on Fabregas.