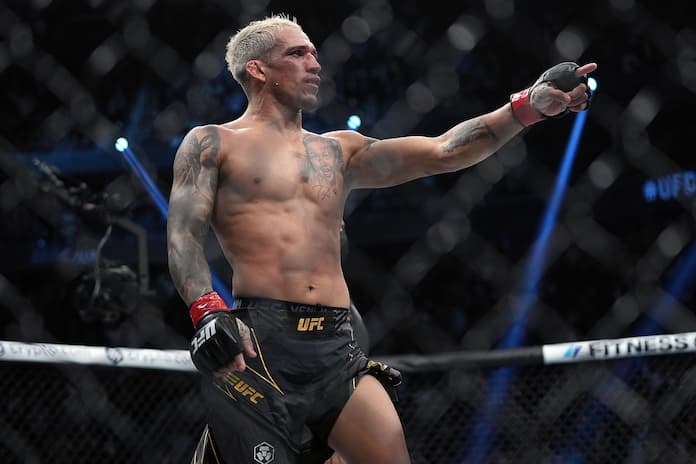 CHARLES OLIVEIRA vs Islam Makhachev goes down at UFC 280 this weekend in the main event. The UFC Lightweight Title is on the line, with Aljamain Sterling defending his UFC Bantamweight Title against former champion TJ Dillashaw in the co-main event. Petr Yan vs Sean O’Malley also features on the main card.

On paper, this fight is a pure 50/50. In Charles Oliveira you have a man who has dominated the lightweight division since Khabib Nurmagomedov’s retirement. In Islam Makhachev, you have the ‘next Khabib’, who is a friend of ‘The Eagle’ and looking to emulate his friend in becoming the 155-pound king whilst being undefeated in the octagon.

If you fancy a bet on this huge main event from UFC 280, read on and check out our betting picks and predictions, as well as making use of the various free bets and betting promos on this page.

UFC Gold in the 155-pound division is on the line this weekend as Charles Oliveira and Islam Makhachev clash for lightweight supremacy. The fight headlines a stellar card at UFC 280, in which there is another title fight with a stacked undercard of talent on show too.

This fight is absolutely compelling. On paper, you have a man competing in his fourth UFC title fight, with an opponent who is yet to face anyone in the Top 5 of the lightweight division.

On the undercard there are some immense fights too. The UFC Bantamweight Title is on the line as Aljamain Sterling defends his world championship belt against the former champion, TJ Dillashaw.

Sean O’Malley, one of the biggest stars in the sport of MMA right now, faces former UFC Bantamweight Champion, Petr Yan. There are a plethora of incredible fights on the prelims as well as the rest of the main card. UFC 280 is set to be the biggest event of 2022 on the MMA calendar.

For the main event itself, you can most certainly make a case for both me. Despite being far less experienced and never having fought the best of the best in the division, Islam Makhachev is the relatively heavy betting favorite in this fight.

On the other hand, Charles Oliveira fights in his fourth successive UFC title fight, having won the previous three and boasting an 11 fight winning streak. He is without a doubt the best lightweight on the planet right now, as well as being arguably the best pound-for-pound fighter on planet earth.

The fight is truly compelling, with the MMA community split right down the middle for this bumper main event. So without further ado, here are our betting picks and best bets for Charles Oliveira vs Islam Makhachev in the main event at UFC 280 this Saturday night from the Etihad Arena, Abu Dhabi.

Our first betting pick is that Charles Oliveira will win the UFC Lightweight Title once again and defeat Islam Makhachev as the betting underdog this Saturday night in the UFC 280 Main Event.

Despite beating the likes of Dustin Poirier, Tony Ferguson, Justin Gaethje and Michel Chandler in his last four fights, Charles Oliveira somehow comes to the United Arab Emirates this weekend as the betting underdog.

Oliveira has nearly the same amount of submission wins as Makhachev has had professional fights. ‘De Bronx’ has an astute stand-up game on the feet, as well as being an incredible grappler and astute wrestler. Oliveira is better in every department than Makhachev for us here at SportsLens.

The Brazilian superstar has fought far more tough opponents, and has been at the top of his game for years. Yes, Makhachev is a real talent. However, he hasn’t experienced fighting anyone as good as Charles Oliveira, in an event of this magnitude, for UFC Gold.

Our Best Bet for this UFC lightweight showdown from Abu Dhabi, United Arab Emirates this weekend is that Charles Oliveira will get the nod on the judges’ scorecards. This is priced sensationally with Bovada, who are offering a mouth-watering +1200 for this outcome.

The reason we can see this going the distance is that Charles Oliveira will be aware of Makhachev’s strong submission game, and could fight a more cautious fight using his superior kickboxing skills.

Despite finishing 10 of his last 11 opponents, we can see this one going the distance with Oliveira getting the nod. Makhachev has a lot of submission victories too, so the Brazilian will be aware of his strengths and will use his more well-rounded skillset to beat the Russian via another method.

This is a huge price with the bookmakers, and looks to be a wager of insane value. If you agree with us and can see this fight going the distance, you can get that at a price of +275 with Bovada. If you want to go one further and think Oliveira will win on points, then take this betting pick at +1200.

Haven’t claimed the Oliveira vs Makhachev betting offer yet? Don’t worry, take a look at the best betting sites and claim the best bookmaker free bets. Be sure to also check out the best offshore betting sites.

Here is a list of Bovada‘s prices for the upcoming fight at UFC 280 this weekend:

When Is Charles Oliveira vs Islam Makhachev?

TV channel: If you have ESPN on your TV, you will be able to watch this compelling lightweight title clash live from the Etihad Arena on ESPN PPV, provided you are a subscriber to the channel and have paid the $74.99 pay-per-view price.

Live stream: ESPN subscribers can also catch the action online and via the ESPN app for free, provided you have the app downloaded on your device, are a subscriber to the channel and have paid for the PPV on your account.