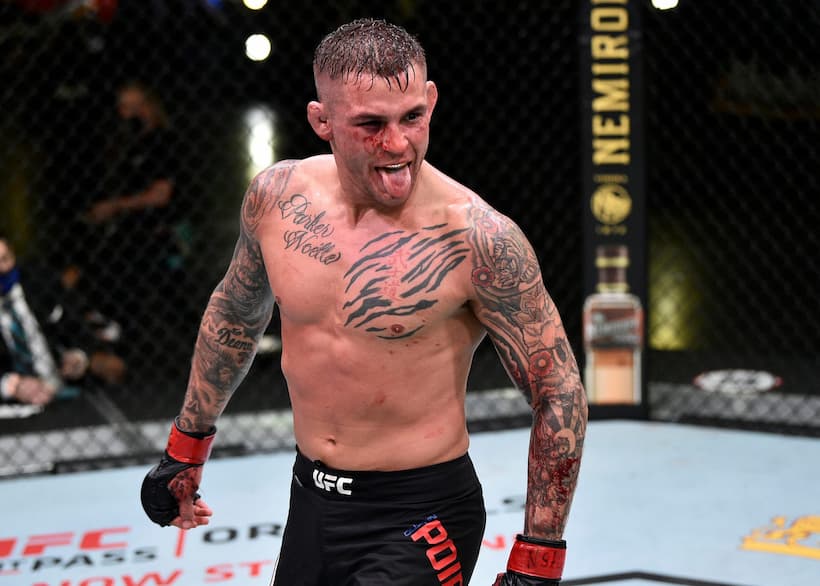 UFC 269: Oliveira vs Poirier is set for Saturday night and, if you’re looking for UFC betting tips, read on to get our predictions for each of the main card bouts. Plus, find out how to Bet £10 and Get £30 at Betfred ahead of the fight.

Bet on UFC 269: Oliviera vs Poirier at Betfred

Headlined by not one but TWO championship bouts, UFC 269 promises to be an action-packed night inside the Octagon as Charles “Do Bronx” Oliviera defends his lightweight strap against “Diamond” Dustin Poirier right after Amanda “Lioness” Nunez takes on Julianna Pena for the womens bantamweight crown!

After rebounding from a turbulent run of results, only to go on an incredible nine-fight winning run, there’s no doubting that Charles “Do Bronx” Oliviera (31-8) deserved to become UFC lightweight champion of the world when he defeated Michael Chandler at UFC 262.

The Brazillian jiu-jitsu specialist has five submission wins and two KO victories in his last ten fights, too. So, it might come as a surprise to some to see him a ranked underdog in his first title defense.

The reason for this, however, is simply down to just how good “Diamond” Dustin Poirier (28-6-1NC) is. Besides a defeat to Khabib Nurmagomedov the last time Poirier tried to crown himself king of the division, the Baton-Rouge-native has won every fight since November 2017, including big Ws over the likes of Conor McGregor (x2), Anthony Pettis, Dan Hooker, and Max Holloway.

Poirier is on record stating that he plans to overwhelm Oliviera with strikes come Saturday night and, based on his recent string of five KO/TKO wins in his last seven trips to the Octagon, we’re not going to argue with the man.

As you can see from the odds, the champion Amanda “Lioness” Nunez (21-4) is the overwhelming favorite to retain her strap vs Julianna Pena (11-4) when the pair meet in the co-main event during the early hours of Sunday morning in what will be Nunez’s ninth title defense.

Nunez has superior power in her hands, she’s in better form, and with submission wins over Sara McMann, Miesha Tate, and most recently Megan Anderson during her reign as women’s bantamweight champion, she’s probably better on the mat, too.

It’s the UFC, so of course, Julianna Pena has a chance of pulling off an upset: the “Venezuelan Vixen” doesn’t strike with the frequency or authority of the champ but does boast decent takedowns, good takedown defense, and is a game striker when on top…

But, we just don’t think there’s much Pena will be able to do about Nunez’s power.

Prediction: Nunez by KO in round two.

Everyone in the Sportslens office is a huge fan of Santiago Ponzinibbio’s (29-4) high volume, no retreat; no surrender-style, and his recent form inside the Octagon has been impressive. The Argentine did come up short vs Li Jingliang at Fight Night: Holloway vs Kattar but, besides that, he’s seven of eight since 2015!

Geoff Neal (13-4) will prove a stern test, though. The American nicknamed “Handz of Steel” boasts four KOs amongst his six UFC wins to date. Neil lands only slightly fewer significant strikes per minute (4.42 SSPM) than Ponzinibbio (4.65 SSPM), but he does, arguably, throw with more fight-ending intentions.

As such, this fight could go either way, but we’re backing the Argentinian Dagger’s chin to hold up as he wins the fight somewhere down in the deep waters.

Prediction: Ponzinibbio to win via TKO in the third round

Bet on Ponzinibbio to win (4/5) at Betfred

New Zealand’s own Kai-Kara France (22-9) is a volume striker who connects with 5.02 SSPM and connects with 38% accuracy. “Don’t Blink” isn’t afraid to get involved in scraps, but only absorbs 3.08 SSPM. In recent fights, France has defeated the likes of Rogerio Bonterin (KO) and Tyson Nam but did come up short vs current champion Brandon Moreno and, more recently, Brandon Royval.

His opponent come Saturday night is the former UFC bantamweight champion Cody “No Love” Garbrandt. Out of form since losing his strap to T.J. Dillashaw, Garbrandt most recently got blasted out of the Octagon by Rob Font and has only won one fight since 2017! “No Love” also boasts less significant strikes per minute than France at 3.17 SSPM and absorbs more at 4.14 SSPM.

As such, we’re backing the New Zealander to claim the biggest scalp of his career to date.

Prediction: Kai-Kara France to win via KO in the second round.

“Sugar” Sean O’Malley (14-1) has taken the UFC by storm ever since first arriving on the scene back at UFC222. O’Malley has won four of his last five fights via decisively via KO/TKO and, though his record is tainted ever-so-slightly by a defeat to Marlon Vera, with 8.25 SSPM at an astonishing 62% accuracy, fans know that this kid is the heir-apparent to the lightweight championship strap.

The only thing you can put against O’Malley at this point is that he lost his one fight vs a true ranked opponent in the division in Vera. But, he will get the chance to set the record straight when he faces a game Raulian Paiva (21-3) in Vegas on Saturday.

Paiva, who has been ranked as high as 14th in the UFC flyweight division, is a useful striker and boasts 4.24 SSPM at 42% accuracy. In comparison with O’Malley, this might seem low but do remember that O’Malley was able to seriously pad his stats when he chalked up 230 strikes vs Kris Moutinho last time out. Paiva definitely has the skills in the stand-up and the ground game to make life difficult for O’Malley, especially if he’s able to get his respect early.

But, we just don’t think Paiva will have enough to deal with O’Malley’s unorthodox techniques and awkward striking angles.

Prediction: Sugar Sean continues his march towards the flyweight crown

New Betfred customers can take advantage of the following promotion ahead of UFC 269: Oliviera vs Poirier: Bet £10 Get £30 + 30 free spins at the casino.

To get £30 in free UFC bets at Betfred, just follow the instructions below: