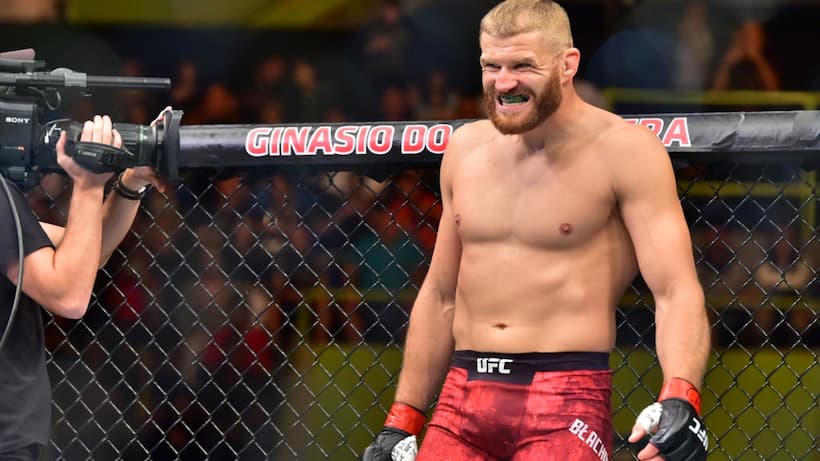 UFC 267: Blachowicz vs Teixeira is set for this Saturday night, and our MMA expert has a host of UFC betting tips to share. Read on to get our picks for each of the main card bouts. Plus, find out how you can claim an exclusive Bet £10 Get £30 promotion at Betfred below.

Bet on UFC 267: Blachowicz vs Teixeira at Betfred

Headlined by what should be an intriguing light-heavyweight championship bout between Jan Blachowicz and Glover Teixeira, UFC 267 also features Petr Yan vs Cory Sandhagen in a co-main for the interim bantamweight championship.

It’s a great card! And if you were planning on putting money on it, read on as we preview every fight and offer our best selection of UFC picks.

Blachowicz (28-8) heads into the bout in great form. He’s won five on the trot and has taken some big-name scalps en route to (and defending) his belt, including Luke Rockhold, Corey Anderson, Dominick Reyes (title fight), and, most recently, Israel Adesanya (title defense).

Typically, Blachowicz is more of a power puncher inside the Octagon, averaging 3.59 significant strikes per minute (SSPM) at 49% accuracy. And he punches hard, too!

However, in his most recent fight vs Adesanya, Blachowicz displayed his versatility as an MMA fighter as he was able to continuously drag the middleweight champion to the mat, delivering rough ground and pound on his way to the biggest W of his career.

His opponent on Saturday night is Glover Teixeria, a Brazillian who last fought for the strap back in 2014 when he was soundly defeated by Jon Jones.

Following the defeat to Jones, Teixeira’s career became a bit of a stop-start affair – one crushing win would be followed up by defeats vs the likes of Anthony Johnson, Alexander Gustafsson, and Corey Anderson.

However, since the Anderson loss in 2018, Teixeira has been on a five-fight winning streak, most recently knocking out Anthony Smith and submitting Thiago Santos.

It’s always difficult to call a UFC championship bout. Anything could happen when these two men throw down in the Octagon. But we are leaning towards the power of the champion and believe that Blachowicz will take a KO win.

Prediction: Bet on Blachowicz to win at 1/3 at Betfred.

Bet on Blachowicz to win (1/3) at Betfred 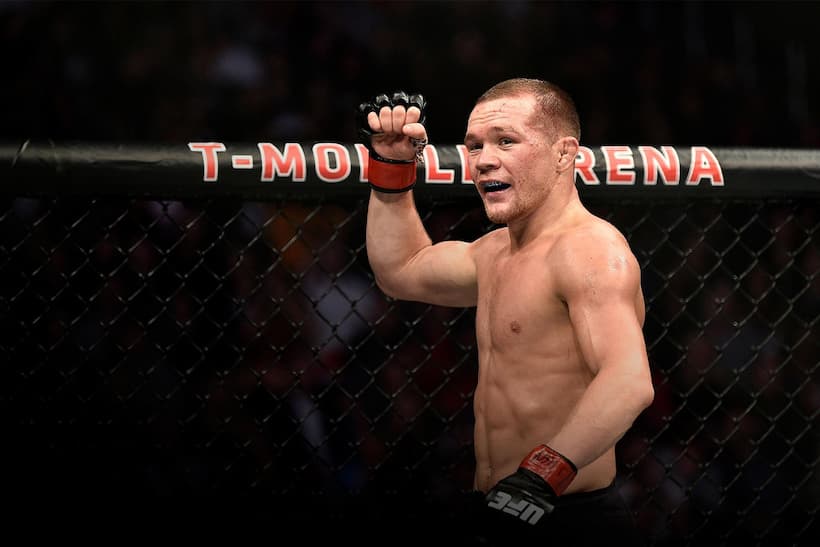 Another fight that’s so difficult to call, this interim bantamweight championship bout between Petr Yan and Cory Sandhagen bares all the hallmarks of a possible MMA classic.

Petr Yan (15-2) was unfortunate to lose his strap against Aljamain Sterling a few months ago. The Russian was in the ascendency in the bout; Sterling appeared to have nothing left to give, but then Yan attempted to knee his grounded opponent, which is a foul. A mistake was made; Sterling certainly made the most of it, and Yan went home without a belt in what was one of the more surreal MMA moments in recent history.

Prior to that, however, Yan had been on an absolute tear in the bantamweight division, not only beating but pummelling the likes of Jose Aldo (championship bout), Urijah Faber, and John Dodson. The Russian lands 6.0 SSPM with 52% accuracy and boasts takedown defense of 90%. Yan’s nickname is No Mercy and, if you haven’t seen him fight before, believe us when we tell you it’s entirely fitting!

The last time we saw Cory Sandhagen in the Octagon, he was very unlucky to lose to a returning T.J. Dillashaw. Sandhagen outstruck his opponent and really bloodied him up but the superior footwork and tenacity of the former bantamweight champion were enough to sway the judges on that night, and Sandhagen emerged from a tough fight with an L on his record.

Before that defeat, the American had been in good form, winning seven of eight bouts, and losing just once to the current champion, the aforementioned Aljamain Sterling.

Sandhagen lands with high volume and high intensity (6.32 SSPM). He’s not quite as accurate as Petr Yan and Yan is certainly the more technically proficient of the two strikers… but, on current form, you can’t discount how good Sandhagen is – he could easily win tomorrow night if he puts it all together.

This fight is tough to call. But, we think that Petr Yan will be hell-bent on reclaiming his title after losing it in such an odd manner and that the Russian will prove to be a little too much for Sandhagen on the night.

Prediction: Bet on Yan at 4/11 at Betfred 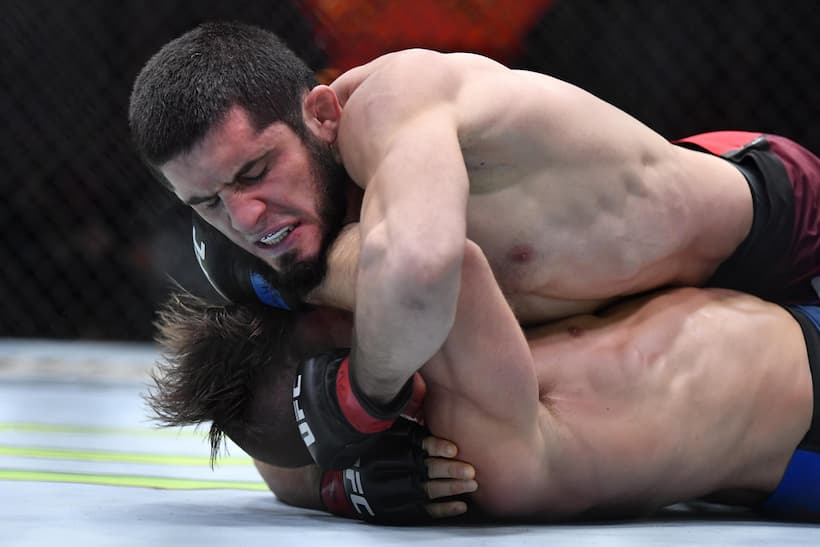 Islam Makhachev (20-1) comes into this one as heavy betting favorite and for good reason: the Russian hasn’t lost a fight in six years and is the heir apparent to Khabib Nurmagomedov’s throne.

Kiwi Dan Hooker (21-10) is an excellent fighter who always comes to throw down and has been involved with some truly memorable bouts over the past few years (Hooker vs Poirier was a war!), and he is more than capable of hitting Makhachev and doing damage on the feet…

We just don’t think The Hangman will have an answer for Makhachev’s ground game; engine, or submission attacks.

Prediction: Makhachev to win at 1/7 at Betfred

Bet on Makhachev to win (1/7) at Betfred

Alexander Volkov (33-9) is a rangy kickboxer who aims to outland his opponents with well-timed, well-placed technical strikes. In a storied career to date, the Russian has defeated the likes of former UFC heavyweight champion Fabricio Wedum and MMA legend Alistair Overeem. However, tough defeats vs the likes of Ciryl Gane (most recently) have conspired to keep Volkov out of the title picture.

To get back in the mix, Volkov has bulked up tremendously in recent months and the added power should come as a real concern for Tybura this evening, especially given that a previously lighter Volkov already boasts 22 KOs on his record.

Marcin Tybura (22-6) is far from in the Octagon to make the numbers up to two, however. The Polish fighter holds wins over the likes of Andrei Arlovski and Greg Hardy and is in the midst of a five-fight winning streak. Tybura can lay claim to a pair of exceptionally heavy hands and a mean top game, which leads us to expect a classic striker’s war between a technician and a brute.

In this case, we’re leaning on Volkov’s technique to get the job done. We think the Russian will target the legs and midsection with kicks; wear his opponent out, and take a late TKO win. But, as always in the UFC, it really could go either way.

Prediction:  Bet on Volkov to win (1/3) at Betfred

Russian-born Swedish competitor Khamzat Chimaev has turned more than a few heads since making his Octagon debut in the summer of 2020. He’s 3-0 in the UFC and has finished each of his three opponents to date: Phillips (submission), McKee (KO), Meerschaert (KO/TKO).

Chimaev lands 9.03 SSPM at 72% accuracy, which is exceptional in both metrics.

His opponent Li Jingliang (18-6) is an experienced, orthodox fighter who most recently defeated the tough Santiago Ponzinibbio via KO in January of this year.

Jingliang matches Chimaev for power. However, volume and accuracy are way down at 4.52 SSPM and 42%, respectively, and we just don’t think the Leech will have enough for his opponent come Saturday night.

Prediction:  Bet on Chimaev to win (1/5) at Betfred 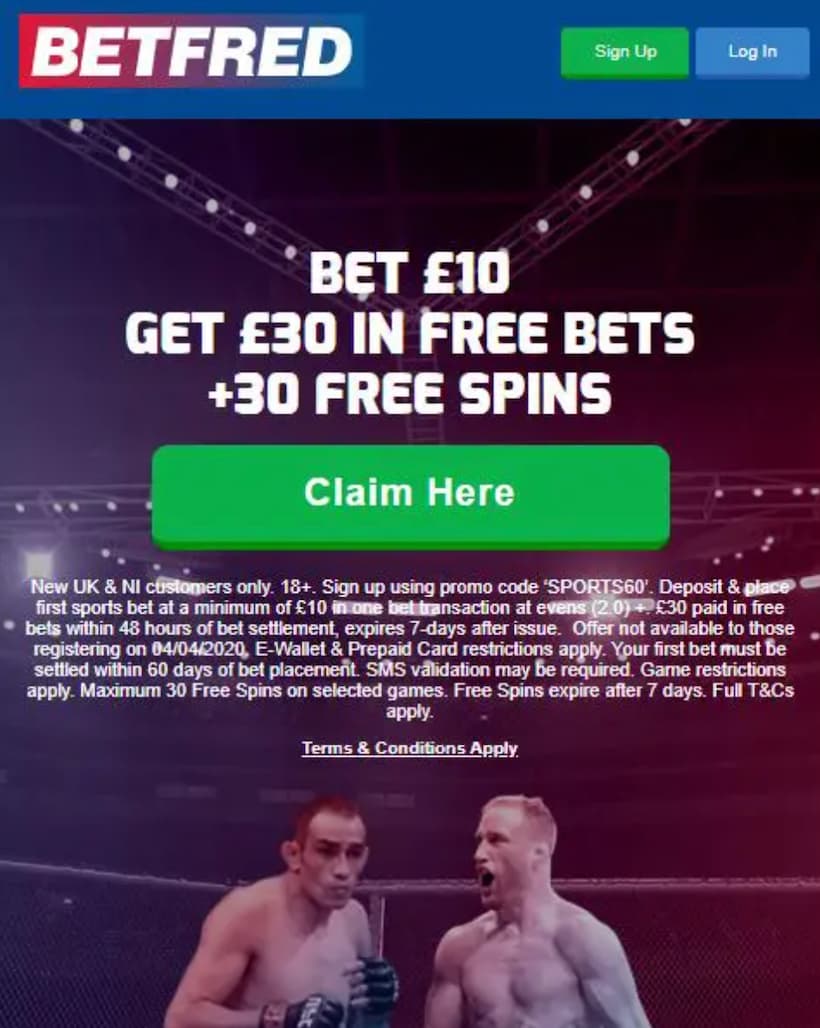 Betfred has a great new customer offer: Bet £10 Get £30 In Free Bets + 30 free spins. This promo can be used in conjunction with UFC 267: Blachowicz vs Teixeira

To claim your £30 in free bet credits at Betfred, just follow the simple steps below: