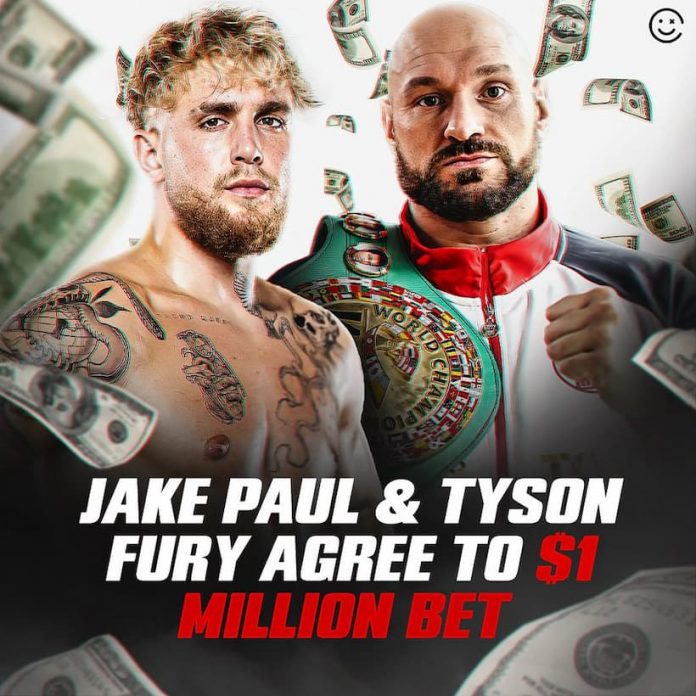 With the fight between Jake Paul and Tommy Fury officially getting announced last week for August 6th at Madison Square Garden in New York, heavyweight king, Tyson Fury, has made a $1 million bet with ‘The Problem Child’ on the outcome of the fight between Paul and Fury’s younger brother, Tommy.

Check out our betting tips and best bets for Jake Paul vs Tommy Fury and the most likely outcomes by clicking this link.

With the highly anticipated super-fight between Jake Paul and Tommy Fury happening in just six weeks time, bother Tyson, the heavyweight champion of the world, has decided to place a bet on the fight with Jake Paul himself.

Fury and Paul have struck a bet on ‘The Problem Child’ facing Tommy Fury at Madison Square Garden on August 6th, with a mega sum of money on the table.

Tyson was originally wanting to bet $100,000 with Paul that his brother, Tommy, would beat him, but Paul laughed off the bet and wanted to up the stakes even more.

With that bait dangling right in front of ‘The Gypsy King’, Tyson couldn’t help but bite. The 33-year-old responded in an instagram message of his own, seemingly agreeing to the bet with Paul. Fury insisted he was going to “put his money where his mouth is”, and it seems he has done exactly that.

It will come as no surprise that Fury is backing his brother to win this celebrity fight in spectacular fashion.

The WBC heavyweight champion of the world believes his younger brother has what it takes to beat Paul and even knock him out.

With that being said, if you want to take Fury’s advice and back ‘TNT’ for the win and to perhaps even win the fight with Jake Paul via KO/TKO, then you can get some great odds with Virgin Bet for the fight.