A quick glance at the Bundesliga table will show you that after the first round of matches, an unfamiliar name currently parades at the top of it — 1899 Hoffenheim. The story of the club rooted in the village of Hoffenheim in South-West Germany is a remarkable one.

For the romantics it is a fairytale; the cynics on the other hand will argue that the rise of Germany’s most controversial club of the last few years sets a dangerous precedent.

The story began back in the early 1990’s with the return of former player Dietmar Hopp to the club. This was no ordinary alumni return though. Hopp brought with him his vast personal fortune, amassed through the software company he co-founded, SAP (currently Europe’s largest software company).

Looking to invest some of his wealth into a football club, Hopp decided against purchasing an established club, opting instead to invest in the club he had played as a centre-forward for in his younger days, the one closest to his heart, TSG 1899 Hoffenheim. At that time, the club was nothing more than an amateur village team turning out in the eighth tier of the German football league system.

In the 18-year period since Hopp became the club’s financial backer, Hoffenheim have risen through the league system to the very top, largely due to the £120 million the entrepreneur has ploughed into the club.

Naturally, parallels have been drawn between Hopp’s involvement with Hoffenheim and Roman Abramovich’s investment in Chelsea. Hopp, though, has been keen to rubbish any suggestion of similarities. Indeed, Hopp has stated that his aims are solely to provide his club with the foundations for long-term success, refuting claims from critics that the club is just his expensive “plaything”.

His investment strategies thus far back-up his claim. In his early years of ownership Hopp invested in state-of-the-art training facilities, and as such 1899 Hoffenheim’s success thus far has been based on the development of youth players from its range of youth academies, which includes teams spanning from under 12s to under 19s age-groups.

The club reached the Regionalliga Sud (third tier) by basing their team on players developed through the club’s youth setup, and proceeded to attain respectable finishing positions in each of their first four seasons in the division. At this point Hopp believed that the club had acquired the necessary foundations and stability in order to push on for promotion to the Bundesliga 2.

For the first time large-scale investment in experienced players and staff took place, preceding the start of Hoffenheim’s 2006/07 campaign. Amongst the newcomers brought in by Hopp was a manager, Ralf Rangnick whom he believed had the credentials to push his beloved Hoffenheim into the upper echelons of German football. Rangnick’s management CV boasted the likes of Vfb Stuttgart, Hannover 96, and Schalke 04. The aim was to be playing in the Bundesliga within three seasons.

Rangnick’s first season in charge ended with a 2nd placed finish, winning promotion to the second tier of German football at the first attempt. It was an unexpectedly quick impact, quicker than Hopp could have hoped for. 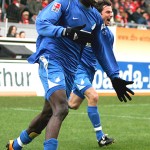 Whilst experienced players were brought in, the core of the side consists of talented young players, who have yet to achieve their potential. It has been an effective mix. Star strikers Wellington and Demba Ba (pictured right) have been joined by experienced internationals Per Nilsson and Andreas Ibertsberger. The squad, perhaps tellingly of Hopp’s regime, lacks any household names or familiar faces.

With the success has come notoriety. Fans have begun to flock from further afield and its 6,350 capacity Dietmar-Hopp Stadion is no longer a viable location to host Bundesliga football. Hence, Hopp has financed the development of a new 30,000 capacity stadium, the Rhine-Neckar Arena, situated in the nearby town of Sinsheim (expected to be completed early next year). Whilst their new stadium is being constructed, Hoffenheim will be playing their home matches at the 26,000 capacity Carl-Benz Stadion in another nearby town, Mannheim.

Whilst the success bestowed upon the club has necessitated a move away from the village of Hoffenheim, Hopp has been keen to ensure the club’s links to its community remain intact, with a variety of sports classes accommodating both gender and age being run by the club.

Hoffenheim’s achievements haven’t been greeted with unanimous acceptance though, with some rival fans labeling the club as “corporate whores”. The criticism has been especially forthcoming in former East Germany where fans of clubs with larger support but less money view Hoffenheim as the epitome of the unfair nature of West German capitalism.

No matter how much success the club enjoys over the next few years, the real test of Dietmar Hopp’s Hoffenheim legacy will be when the 68 year old is no longer around to bankroll the club and sign the cheques. The case of Gretna in the Scottish Premier League has shown the risk involved if a club forgets its long-term commitment in favour of short-term success. So far, Hopp has acted sensibly; I hope he continues to do so.

Currently the club has just 1,800 registered club members, a figure dwarfed by the likes of Bayern Munich who have 125,115 and Schalke 04 who have 73,699. The Bundesliga experience will increase the club’s exposure to the general public, and should help to build its reputation and attract fans. They need it to.

Attracting fans may be the easy part; more difficult is ensuring that they are not fickle enough to leave when times are bad. The Hoffenheim story could have an unhappy ending if the foundations for continued success fail to lie firmly in place.

Others believe Hoffenheim are only on the path to bigger and better things. Indeed, Bayern Munich manager Jurgen Klinsmann has suggested that “sooner of later Hoffenheim are going to become a superpower in German football.”

In the present though, the 3-0 win away at Energie Cottbus last Saturday was just the beginning of Hoffenheim’s Bundesliga adventure, but a strong indicator of their intent to succeed at the highest level and their belief that they deserve to be there.

Could Hoffenheim become the first village club to compete in the Champions League? Only time will tell. With Hopp and Rangnick at the club’s helm anything seems possible.