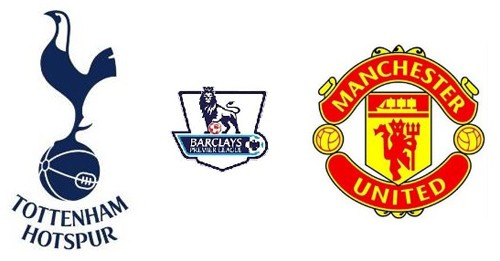 Tottenham Hotspur will take on Manchester United on Sunday in the Premier League at the White Hart Lane where Spurs manager Andre Villas-Boas will be looking to bounce back strongly in the league, following their 6-0 humiliating defeat at the hands of Manchester City last weekend.

Andre Villas-Boas is under huge pressure at the moment and there are even talks of him getting the sack, just after 13 games in the season, if the reports are to be believed. Despite spending more than £100 million in rebuilding a squad according to his own taste, there are more problems than solutions at the moment.

Currently sitting on 9th in the table with 20 points, the main problem of Spurs is their lack of goals. With just 9 goals in 12 games – striker Roberto Soldado has come under immense criticism for the first time, while following their defeat against City, they can hardly boast about their defence either.

Spurs need to bounce back and that too quickly. Another defeat here would take them out of equation for league challenge while top-four-finish will be under huge threat as well. They are 9/5 with Ladbrokes to earn a victory over Red Devils.

The task is difficult as Manchester United are currently one of the in-form teams in the Premier League. They are undefeated in 11 games and are coming to this fixture on the back of a 5-0 victory over Bayer Leverkusen in the Champions League.

On top of that, the Red Devils have an enviable record against Spurs – they are undefeated in 27 of their last 28 matches in all competitions and haven’t lost at White Hart Lane since 2001. David Moyes’s side is 6/4 with Ladbrokes to win the game against Spurs on Sunday.

Andre Villas-Boas will miss the services of Emmanuel Adebayor because of a groin injury while Christian Eriksen, Danny Rose and Harry Kane all remain unavailable.

Robin van Persie and Nemanja Vidic could return from groin and head injuries but Michael Carrick is still out. Midfielder Fellaini is available again after missing out in midweek.

Van Persie fit again would return to the starting line-up, while Vidic could partner either of Ferdinand and Evans at the back.

Prediction: 1-1; Spurs will be motivated for this game while United are on song as well. Expect a late goal thriller on Sunday.