The second North London derby of the season kicks off this weekend’s Premier League action with a lunchtime start at White Hart Lane on Saturday.

Either of these sides could end the weekend in the UEFA Champions League places with Arsenal starting the weekend behind Southampton only on goal difference and Tottenham only two points behind their rivals.

Both teams are in good form, each taking nine points from a possible 12 in the Premier League to start 2015.

Mauricio Pochettino has a full squad to pick from following Nabil Bentaleb’s return from the African Cup of Nations.

Alexis Sánchez has been ruled out with a hamstring injury but could return for Tuesday’s game with Leicester City. The Chilean has been involved in 19 goals in his 21 Premier League games this season.

Danny Welbeck is in contention for the first time since picking up an injury in the Gunners’ Boxing Day victory over West Ham. 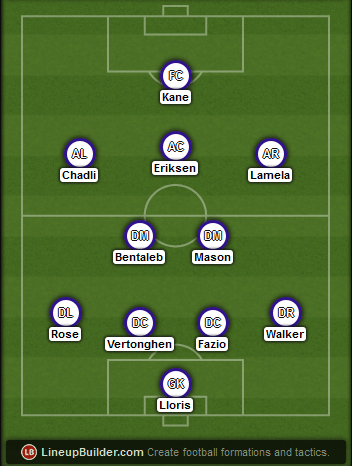 This is who we believe Mauricio Pochettino will pick on Saturday. Danny Rose and Kyle Walker seem to be his preferred full-backs whilst Jan Vertonghen and Federico Fazio have established themselves as the first choice centre-back pairing. Ryan Mason is having a breakout season in front of the back four, partnered by the returning Nabil Bentaleb. Nacer Chadlie had an excellent start to the season before injuries whilst Christian Eriksen has been consistent and Harry Kane has had an excellent mid-season. 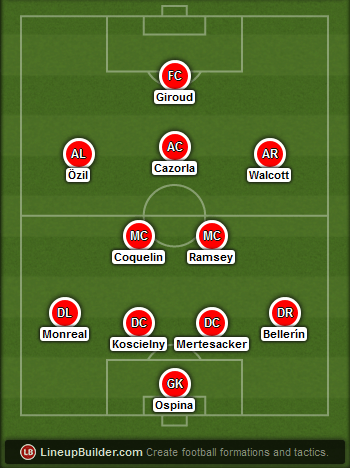 Arsène Wenger doesn’t have a fully fit squad to choose from but a strong squad he does have. We don’t see Gabriel Paulista starting this one, if he does it would be at right-back but there’s no reason to drop Héctor Bellerín whilst he’s playing well. Francis Coquelin and Aaron Ramsey offer the best defence the manager has available for his back four. The front four put five past Aston Villa so there’s no reason to shake it up whilst Alexis Sánchez remains out.

Santi Cazorla vs Nabil Bentaleb
Arsenal’s Spanish playmaker has been in form for a couple of months now and has forced their record signing Mesut Özil out wide upon his return. Santi Cazorla has been a match winner with his creativity and a couple of goals of late. The Tottenham defence hasn’t been the strongest this season, in fact no team has conceded more goals than Spurs in the current top 10. Look out for Cazorla to find space to thread his passes through on the counter-attack and in open play on Saturday.

Theo Walcott vs Danny Rose
Theo Walcott scored inside two minute against Brighton in the FA Cup and followed it up with another against Aston Villa last weekend. The forward may be matched for pace by Danny Rose in this game but the Gunner has the talent to beat the Tottenham left-back. Rose is not the best of defenders so don’t be surprised if Walcott finds space or creates space against him.

Christian Eriksen vs Francis Coquelin
Tottenham’s best form of attack in this match will probably come through Christian Eriksen. The playmaker will see the ball in the middle of the pitch, and has Harry Kane to pick out up front. The Dane will be supported by Nacer Chadli and Érik Lamela down the wings. Arsenal have left space on the counter this season so Francis Coquelin will be important in breaking up the counters and threat of Eriksen.

Prediction: Tottenham 1-2 Arsenal
These two played out a draw at the Emirates this season but Arsenal have stepped up in recent weeks. Wenger’s side have won won five in a row in all competitions, keeping clean sheets in four of those. Tottenham’s form in the league is good but have failed to win five of the last 10 in all competitions.