Tottenham are leading the chase to sign French striker Loic Remy in the summer, according to reports from France.

The 27-year-old QPR striker, who has had a great campaign for Newcastle last season, where he scored 14 league goals, has been a reported target of several Premier League clubs including Arsenal and Liverpool. 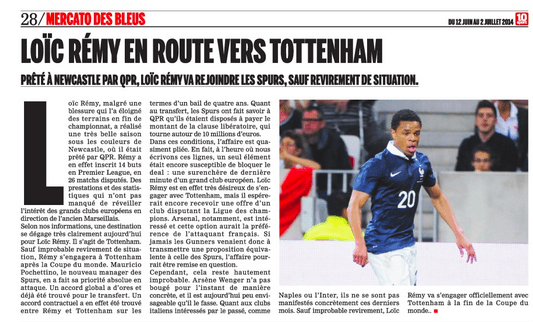 The Gunners need a striker in the summer and have targeted Remy, who has a reported £8m release clause on his contract.

Liverpool are also thought to be interested in him and have scouted the player on few occasions. Furthermore, club legend and now football pundit Mark Lawrenson had urged manager Brendan Rodgers to sign the striker. However, having signed Rickie Lambert from Southampton, it is hard to see Liverpool going for any other striker again in this transfer window.

French magazine Le 10 Sport now claims that Tottenham Hotspur are leading the chase to sign Remy and the North London club have offered him a four-year-contract already. New manager Mauricio Pochettino is keen to add a good striker to the side and wants Remy to lead the attacking line at the White Hart Lane.