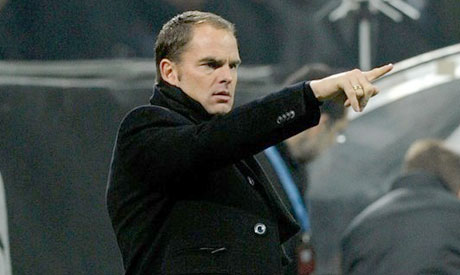 Ajax boss Frank De Boer has been approached by Tottenham to take over as their manager in the summer. 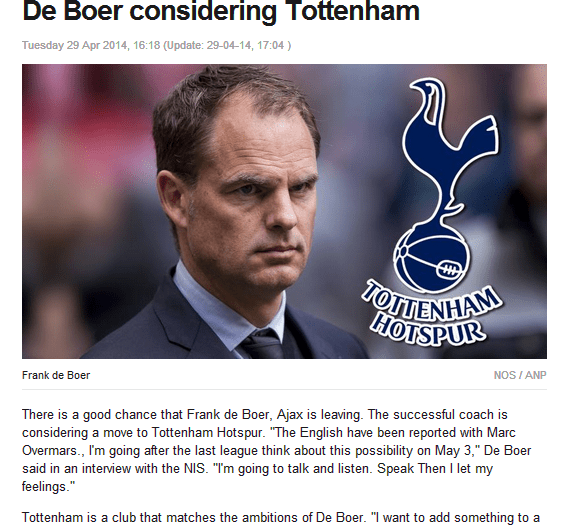 Tottenham have endured a tough season in the Premier League after a shopping spree last summer but then manager Andre Villas Boas failed to live up to expectations to garnering a Champions League spot. The Portuguese was replaced by Tim Sherwood, the latter who enjoys a better win percentage than any other Tottenham manager in the Premier League era.

However Chairman Daniel Levy  is desperate to bring in stability to the club by bringing in a more experienced name with De Boer being touted to take charge in North London.

It is believed that De Boer has been informed of Tottenham’s interest by Ajax football director, Marc Overmars. The story has been confirmed by Dutch national broadcaster NOS on Tuesday.

The 43 year old Dutchman led Ajax to their fourth consecutive Erdevise title in the weekend, a testament of his flourishing reputation in his native country. Spurs were believed to have been chasing Louis Van Gaal to take charge at White Hart Lane but the 62 year old is now firmly in pole position for the vacant Manchester United job in the summer.

There were also reports of former AC Milan manager Massimiliano Allegri taking over from Tim Sherwood but those rumours linking the Italian has died down over the past few weeks.

De Boer however has given the clearest indication that a move to the Premier League excites him of a new challenge.

“Spurs have made an approach. After the last league game I’ll think about it. I’ll talk to them and listen what they have to say. I would like to add something to a club like Brendan Rodgers did at Liverpool.”

Dutch newspaper De Telegraaf have also gone to the extent claiming that former Swansea manager and club legend Micheal Laudrup would be the logical successor is De Boer leaves for White Hart lane.