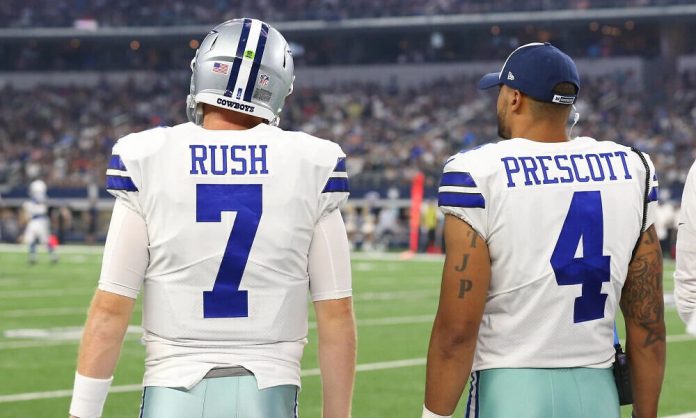 The Dallas Cowboys got themselves in an interesting position when Dak Prescott found out that he had to get surgery on his hand after getting injured against the Tampa Bay Buccaneers in Week 1. The Cowboys weren’t able to get much going throughout that game as they lost 19-3 and Prescott only threw for 134 yards. It was a game and day that the Cowboys are going to want to forget, but if their Week 2 game was any indication, this team can still win football games of an above-average level.

On Sunday, they had the opportunity of playing the former Super Bowl runner-up Cincinnati Bengals and they ended up winning that game 20-17 as Cooper Rush was a big part of what they were able to do. The backup quarterback, who happens to be the starter now, finished the game with 31 pass attempts and completed 19 of those for 235 yards and one touchdown.

Tony Romo had some big words about what Cooper Rush did for the Cowboys throughout their win.

“He has improved his throwing mechanics, Romo opined about Cooper Rush during a CBS broadcast  Sunday (h/t Jon Machota of The Athletic). He’s got a great base in the pocket. He knows the game and he gets through (his progressions) quickly, and he lets it go. He’s not scared. He’s tough. He can take a hit,” Romo added.

The Cowboys and Rush obviously still have a ton to do, but if that one game is any indication, this team can still make the playoffs this season. They have a favorable schedule coming up throughout the next two weeks as they will take on the New York Giants and the Washington Commanders. After that, it gets a bit more difficult taking on the Los Angeles Rams and Philadelphia Eagles, but if they can split those two games, there’s a good chance that Dallas is still going to be in a spot to make the playoffs this season.