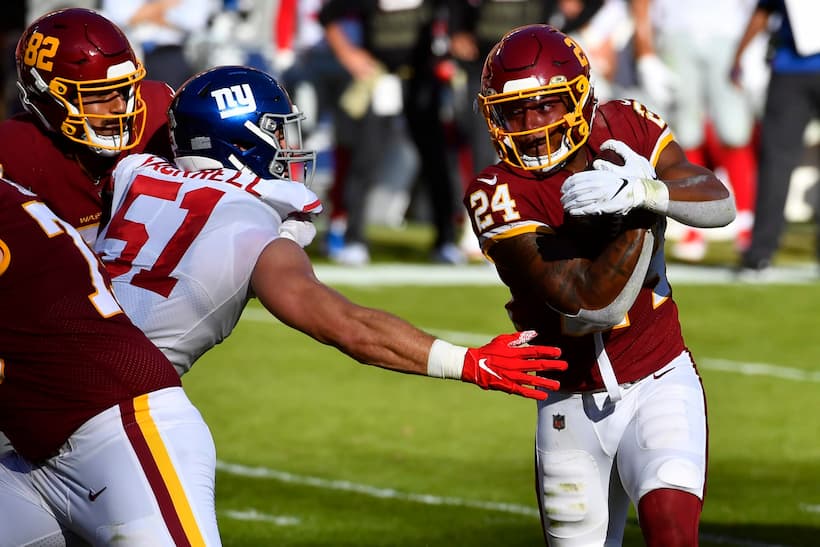 NFL fans can claim a $1,000 deposit bonus and a risk-free $25 Free Player Prop Bet by signing up to BetOnline to wager on TNF tonight!

Coach Ron Rivera’s Washington Football team has a chance to bounce back from the Week-1 defeat to the L.A. Chargers when they entertain division rivals the New York Giants in tonight’s first installment of TNF!

For a full betting preview, and the latest odds and deposit bonuses on offer at BetOnline, read on.

Despite a tough loss to the Chargers last week, the Washington Football Team are still sizeable favorites for the home fixture vs the Giants, as evidenced by the -178 on the moneyline.

The New York Giants’ main issue at present is that without star RB Saquon Barkley at full fitness, there is no run game. Barkley and Devontae Booker toiled vs a tough Broncos defense last week, picking up just 33-yards from a combined 14 attempts. The profligacy in this metric makes it hard to generate enough yards to convert scores and leads to a one-dimensional passing attack, which is why we like the look of Washington -3.5 on the spread, too – the Giants simply don’t score enough points to cover theirs.

When it comes to huge onboarding bonuses and risk-free bets for TNF’s Giants vs Washington showdown, BetOnline is leading the charge.

Click the link below to register at the BetOnline Sportsbook and get up to a $1,000 matched deposit bonus.

Washington Football Team lost a close one to the Los Angeles Chargers last Sunday, going down 16-20. The arm strength of QB Justin Herbert, and the receiving prowess of Keenan Allen (100-yards) and Mike Williams proved too much for the Washington secondary, especially once Washington’s own QB Ryan Fitzpatrick exited the game with a hip injury. In truth, Fitzmagic’s replacement Taylor Heinicke played well enough but well enough was never going to get the job done up against last season’s Rookie of the Year (Herbert).

The Giants make the short trip over to Washington on the back of a loss, too. The run game was absent from the playbook last week vs the Broncos; Saquon Barkley seemed tentative (who can blame him?) after injury, and the offensive line struggled to open up holes. QB Daniel Jones passed the ball well enough (22/37; 267 yards) but a crucial fumble late on wrecked his afternoon, and the Giants ended up getting humbled 27-13.

Of more concern to Giants fans will be the usually-capable run defense which allowed over 6-yards per carry to the Broncos and they’ll be hoping for an improved performance tonight. Especially up against Washington’s dual-threat RB Antonio Gibson, who went for 90-yards vs Chargers and who you can get on the BetOnline specials market for O/U 19.5 receiving yards and O/U 72.5 rushing yards at -114.

On the injury front, Giants RB Saquon Barkley is questionable but expect him to feature, all be it with a reduced workload. Pro-Bowl tight-end Evan Engram is a doubt for the trip to the capital, so Kyle Rudolph is expected to fill in, and starting LG Shane Lemieux is also questionable.

For Washington, QB Ryan Fitzpatrick will miss at least 5-weeks with a hip injury, so Taylor Heinicke will continue under center. New WR Curtis Samuel is also set for a stint on IR, meaning more reps and catches for speedy rookie Dyami Brown.

Neither offense was on top form last week, so this game does have the potential to be a low-scoring affair, which is worth noting if you’re a fan of the total points markets.

But the run game of Washington and the scary hand skills of WR Terry McLaurin will be hard going for the Giants D. Plus, NY QB Daniel Jones propensity to make mistakes under pressure vs the rush means it’s hard to bet against Chase Young and Washington on their home patch.

The odds might not be great, but Washington to win at -178 is where the smart money is.

Bet on Washington to win at -178 at BetOnline