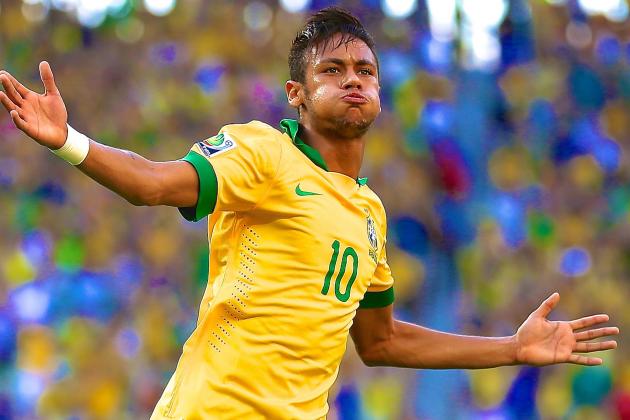 Brazil is always expected to contend on soccer’s biggest stage, and this year is no exception: the 2014 World Cup host team boasts several of the best players in the world, and seems cohesive under relatively new manager Luiz Felipe Scolari.

It’s no surprise then, that Brazil is favored to win it all according to their 2014 FIFA World Cup odds. Still, the team is not without its doubts. While they should roll easily through their Group A competition (Mexico, Cameroon, and Croatia), more challenging opponents await in the later stages that could push the green and gold.

Is Neymar Ready to Lead?

Brazil’s team is stacked from top to bottom, but if there’s a weakness, it’s at striker. 22-year old Neymar’s transfer to La Liga this past year has seen the star score 15 goals in 29 games for Barcelona as he adjusts to a new system.

A return to Scolari’s game planning, which helped Neymar thrive at the Confederation Cup in June (four goals in five games), should boost Neymar’s play for his country. Nonetheless, the question remains if this young man can handle the pressure of the biggest moment of his career.

Manager Scolari has polarized Brazilian fans over the last two decades, and his strategy in 2014 could prove even more divisive. In 2002, Scolari was trusted with a very talented Brazilian side and adjusted the team away from their famous 4-4-2 formation, a move that caught him a nation’s helping of flack.

Fast forward to the team winning it all in that year’s World Cup, and Scolari was so thoroughly praised that when Brazil needed a coach after canning Mano Menezes after the 2012 Summer Olympics, they turned to Scolari.

Since taking over again, Scolari has been both jeered (after the team drew with England) and celebrated (after Brazil won the Confederations Cup in 2013 with a dominant win over Spain). This could be the tournament that solidifies the coach’s legacy once and for all.

After major protests kicked up around the 2013 Confederations Cup, it is clear that thousands of Brazilians will come out in force to protest the multi-billion event being held on their home soil.

Scolari has said he will not prevent his players from commenting, an admirable move that may nonetheless backfire as his players are caught in what will be an all-consuming media swarm in their soccer-mad country.

Packed with talent, the off-field distractions may prove to be one of the biggest challenges for the tournament’s odds-on favorites.