India
Home News the spl are at it again

So we have another stupid suggestion by another Scottish team, and again we have the same stupid outcome.

This time Rangers asked if they could postpone their game with SPL minnows Gretna so that they could fully concentrate on the Champions League game with Lyon in midweek. Surely this shouldn’t be allowed!

This is clearly an unfair advantage in Rangers’ favour, one feels. Especially when you couple it with the fact that Lyon have also this week asked if they would be allowed to postpone their game with Caen so that they could focus on their clash at Ibrox, but no, big round of applause to the French FA who have got the call right and have told them to bugger off. You would think that as Lyon are French Champions they would have a better chance of a fixture reprieve but no, the FA stood strong and fair play to them. 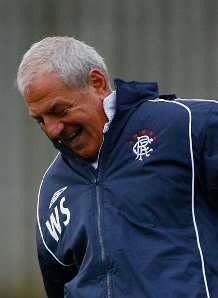 The quote by Davie Irons (Gretna Manager) was laughable too after he gave his reasons for co-operating with Rangers and the SPL: ‘The implications for Scottish football could be tremendous‘. I’m failing to see these other than the glaringly obvious one; this could allow the total monopoly of Glasgow over the SPL to a complete and total shut-out. Granted, Scottish football has improved over the past 3 seasons, culminating in the near-miss at Euro 2008, but the gulf between Celtic, Rangers and the rest is as such that a gap is extremely unlikely to be made up throughout the course of the season, and that shows no signs of changing because Hibs, Dundee United and Motherwell – currently joint 3rd in the SPL – aren’t able to attract the type of footballer who is the equal to Shunsuke Nakamura or Barry Ferguson, in my opinion the two finest players in Glasgow and the SPL.

Now the match on Tuesday at the Stade Vélodrome holds greater significance in my opinion, where the most successful club from these shores, Liverpool, fight to stay alive in Europe’s elite against Olympique Marseille. This is more important because

That’s my opinion anyway. But the point being made, would Steve Coppell be happy to let Rafa’s lads take the week off before crossing the channel? I very much doubt it. Also there is a monumental clash next week at Anfield with Manchester United visiting, so why doesn’t Rafa write to UEFA and ask for a reprieve?

But the main point being here is the fact that the SPL are complete idiots who seem all out to belittle football in Europe. First the weekend’s rest before Scotland-Italy and now Rangers. Also why weren’t Celtic granted the same privilege? Its total insanity the decision this week and I am still wondering why Platini and Gaillard are keeping quiet about it! The gruesome-twosome are never usually shy of a word or two and now when there is genuine attempts on belittling European football they shut up!

What do you think then? SPL right or wrong?