Another Premier League season has come to an end. For serious punters, the football season can be a grind. An enjoyable grind but a grind nonetheless. A perpetual routine of updating spreadsheets, adjusting ratings, pricing up match after match coupled with the somewhat schizoid experience of one week begging for heaven that a particular club wins only to find yourself hurling equal hope that they lose the next.

Obviously an article such as this, a betting retrospective, would have been of far more value about nine months ago. Regardless, let’s do a little reverse-crystal-balling and hand out the Premier League Betting Awards for 2011/2012.

Best Teams to Back to Win

The chart below shows the profitability of each club when backed to win across the course of the season at even stakes. 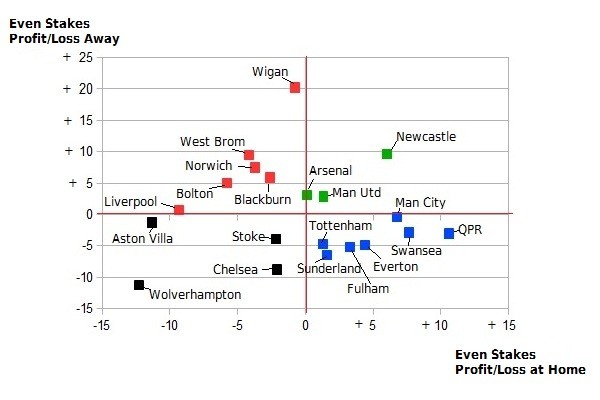 The Green : The clubs in green are those that recorded an even stakes profit at both home and away over the course of the season. In this camp there were just three clubs in 2011/2012 – Newcastle, Manchester United and Arsenal. As might be expected from their more or less unexpected form, Newcastle record the most consistent profits for punters this season. At home they were 6 units above break even while away from home they collected an even stakes profit of almost 10 units.

The Blue : The clubs in blue were clubs that recorded even stakes profits at home in 2011/2012 while recording a loss away from home. Seven clubs featured in this category – QPR, Manchester City, Tottenham, Sunderland, Fulham, Everton and Swansea. It was QPR that recorded the most erratic form of this group, collecting almost 11 units of profit at even stakes at home while delivering a loss of just over 3 units when visitors.

The Red : The clubs in red were clubs that recorded an overall even stakes profit in away matches this season while delivering an overall loss in home matches. Six clubs featured in this group – Wigan, West Brom, Norwich, Blackburn, Bolton and Liverpool. It was Wigan that displayed the most skewed performance of the season, giving punters a tremendous return of over 20 units profit at even stakes when on the road and giving a slight loss when at home in season 2011/2012.

The Black : The clubs in black were clubs that gave punters nightmares in 2011/2012, recording both a loss at home and on the road. Four clubs feature in this group – Aston Villa, Chelsea, Stoke and Wolverhampton. It was Wolves who were, as we might have expected, the worst team of the season to back to win, giving punters a loss of over 12 units at even stakes at home while not doing much better away from home, returning a loss of just over 11 units. Had you backed them to win at even stakes for the entire 38 match campaign, they would have sunk you over 23 units.

Best Teams to Bet Against

Let’s now look at which clubs were the best to back against. The chart below shows the profitability of each club had you bet on their opponents to win in each match at even stakes across the course of season 2011/2012. 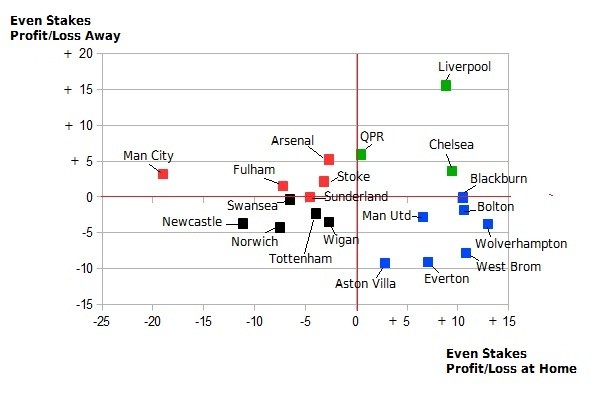 The Green : The clubs in green were those that had you backed their opponents to win, would have given you a profit in both home and away matches over the course of this season. Three clubs feature in this group – Liverpool, QPR and Chelsea. It’s perhaps no surprise to see Liverpool far and away the best club to bet against this season. With their home and away form combined, had you bet on their opponents this season at even stakes, you would have walked away with a profit over their 38 matches of 24 units.

The Blue : The clubs in blue were those who while playing at home gave backers of their opponents a profit over the course of the season while delivering a loss to such sceptics away from home. Seven clubs featured in this group – Aston Villa, Everton, Manchester United, West Brom, Bolton, Blackburn and Wolverhampton. Aston Villa were perhaps the surprise of the group. Backing the visitors in Villa home matches this season would have seen you collect an even stakes profit of just over 3 units while betting against Villa away from home would have seen you in the hole over 10 units.

The Red : The clubs displayed in red were those that were great to bet against away from home in 2011/2012 but not so good to bet against when playing at home. Five clubs feature in this group – Manchester City, Fulham, Sunderland, Stoke and Arsenal. The clear outlier here was Manchester City as betting on their opponents to win in City home matches this season would have seen you go under on each occasion, suffering a 100% loss of 19 units. In City away matches however, betting on their opponents would have seen you clear a profit at even stakes of just over 3 units.

The Black : These clubs were those that you didn’t want to find yourself betting against in 2011/2012. Doing so would have seen you take a loss in both home and away matches over the duration of the season. Five clubs feature in this group – Newcastle, Norwich, Swansea, Wigan and Tottenham. It’s no surprise to see the likes of Newcastle, Norwich and Swansea in this group as they perpetually undermined doubters throughout season 2011/2012.

Best Teams to Bet the Draw

So which clubs were those that gave the best value for those who were backing the draw in 2011/2012? The chart below shows us. 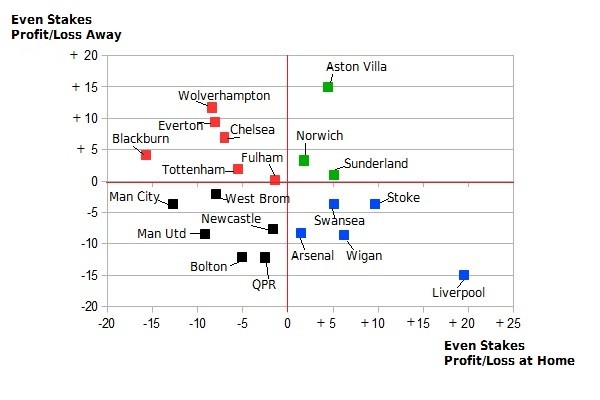 The Green : These were the clubs that delivered an even stakes profit for the drawn at both home and away over the course of the season. Three clubs feature in this group – Aston Villa, Norwich and Sunderland. Aston Villa the clear oddity of the group as they collected almost 15 units of profit for the draw at even stakes in away matches this season, while gathering a profit of over 4 units at home.

The Blue : Five clubs gave punters draw value at home this season while delivering a loss on the road. They were – Liverpool, Stoke, Swansea, Wigan and Arsenal. Liverpool is the club that stands alone in the group as they drew at home on 9 occasions in 2011/2012 while just once away from home.

The Red : These clubs have draw value away from home in season 2011/2012 while giving draw backers a loss in home matches. Six clubs feature here – Wolverhampton, Everton, Chelsea, Fulham, Tottenham and Blackburn. Blackburn in particular struggled to find results at home this season, collecting just one draw on home turf while managing to find a drawn result on 6 occasions when visitors.

The Black : So which clubs were the worst to bet on for a draw in 2011/2012? Six clubs feature in this group – Manchester City, Manchester United, Newcastle, West Brom, Bolton and QPR. The two Manchester clubs weren’t the sort of clubs you wanted to be backing for a drawn result this season. Doing so over the course of the season for their combined 76 matches would have seen you leave with a loss over almost 34 units. Disastrous.

Best Team to Bet Over 2.5 goals

So finally, let’s take a look at the Over/Under 2.5 goal markets. The chart below shows which clubs were the best and worst to bet the Over in 2011/2012. 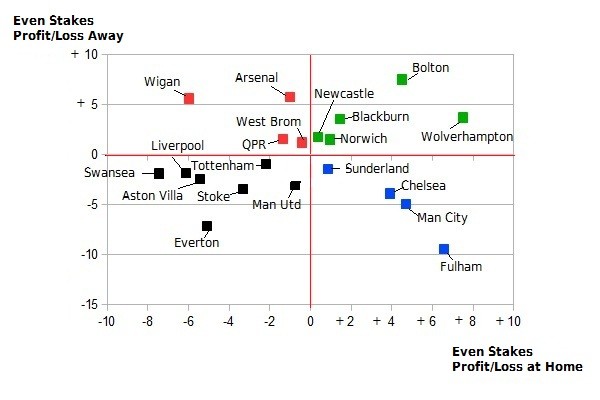 The Green – These were the clubs that exceeded goal scoring expectations both home and away this season, returning a profit for punters backing the Over 2.5 goals. Five clubs feature here – Bolton, Wolverhampton, Blackburn, Norwich and Newcastle. Both Bolton and Wolves were the clear best clubs to bet on the Over 2.5 goals in 2011/2012. Doing so across the course of their combined 76 match season would have seen you collect a profit of 23 units for your 76 units invested.

The Blue : These were the clubs that gave Over 2.5 goal punters great return at home while delivering a loss over the season when playing away. Four clubs feature in this group – Fulham, Manchester City, Chelsea and Sunderland. Fulham was quite perverse here as they gave Over punters an even stakes return of almost 7 units profit in home matches, while away from home thumping Over backers with a loss of over 9 units.

The Red : These were clubs that gave Over backs a profit across the course of the season when playing away while delivering a loss in home matches. Four clubs feature here – Wigan, Arsenal, QPR and West Brom. Wigan matches showed discriminating goal scoring tendencies in 2011/2012, giving Over backers a loss at even stakes of almost 6 units at home while away Wigan matches delivered Over punters a profit of almost 6 units.

The Black : These are clubs that gave Over punters great frustration in 2011/2012, delivering a loss at both home and away and of course, in process delivering Under supporters much delight. Seven clubs feature in this group – Everton, Swansea, Liverpool, Tottenham, Stoke, Aston Villa and Manchester United. Everton was the only outlier here, giving Over punters much grief in 2011/2012, delivering a combined loss at even stakes over their 38 matches of over 12 units.

So there you have it, the Premier League Betting Awards for 2011/2012, the clubs that defied expectations and those that lived up to them. Which clubs will be next year’s big earners? I’ll tell you that the same time next year.