Note: In the wake of the current WGA strike wreaking havoc on American television, I have included excerpts from a script I am proposing to any major studio executive who happens to be read.ing this with airtime slots to fill. I plan to adapt and rearrange selected scenes and dialogue from The Godfather Trilogy into a one-hour made-for-TV epic about Michael Owen’s career.

Michael Corleowen: Do you still fear me Kay?
Kay Adams Mourads: I don’t fear you Michael, I just dread you.

There was a time I might have been lambasted for this piece. Considering my chosen language of expression, I might have even been accused of blasphemy, and rightfully so. For there was also a time when Michael James Owen was one of the most efficient strikers alive, a prominent member of the select club of forwards most commonly referred to as “clinical”, that most coveted of fictional football terms. Unfortunately for Michael, that time has regrettably passed, the latter adjective now lugging with it a dark and far more ironic meaning when used to describe him.

Recent performances unquestionably prove he can remain a threat, but does England’s godson really still rank among the best? Alas, given my now all-too-familiar lack of surprise, or even disappointment, upon first witnessing the photograph spearheading this article, I’m afraid my answer is a curt and tepid “no”. 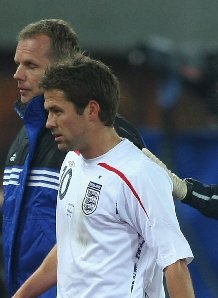 Yes. It is. He’s injured again. Which means what for club and country? Not as much as one might think. Owen will undoubtedly retire a worthy hero as England’s all-time leader in goals scored, but their impossibly prolonged reliance on him flirts with the absurd. If Wayne Rooney, when healthy, come somehow summon his inner Maniche and play as consistently well in international fixtures as he does in the league, and if Steve McClaren could somehow reverse his lobotomy and actually send out a squad with eleven distinct positions, England would be looking at Owen as a welcome luxury rather than a vital necessity.

Considering the unfortunate pattern of irregularity his injury-plagued career seems unable to abscond, perhaps that is precisely how they should perceive him. A record of 40 goals in 88 caps is undeniably ridiculous, but if it’s recent goal tallies you solely respect, someone could remind you that Peter Crouch has 11 in his last 13. Care to plan your entire attack around him? Didn’t think so. When he’s fit, no one can argue Owen won’t contribute and score; he simply can’t be expected to do it as often anymore. Rooney should be placing all the weight squarely on his shoulders, at least while he waits for Theo Walcott to mature some before relieving him of part of the load that Jermain Defoe seems unable to bear.

Michael Corleowen: If someone is going around this city saying, “Fuck Michael Corleowen,” what do we do with a piece of shit like that? He’s a fuckin’ dog.
Joey Barta: Yes, it’s true. If someone were to say such a thing, they would not be a friend. They would be a dog.

As for Newcastle United? Owen’s latest absence secures an otherwise non-guaranteed place in the starting lineup for our leading scorer this season and the last. Obafemi Martins is what Owen used to be: short, wily and devastatingly fast. What he blatantly lacks is the assuredness in front of goal that Owen was once heralded for. How does one find this? He plays a full 90 minutes, week-in, week-out, until he does. Just ask Benjani Mwaruwari. Since taking a seemingly unprovoked stab at Rafa Benitez, Sam Allardyce seems to have symbolically recanted his statements by adopting his Spanish counterpart’s rotation policy, with an occasional splash of nepotism on the rocks. Other than maybe David Rozenhal, whose calamitous late September day at the City of Manchester Stadium has seen him harshly resigned to the substitutes’ bench at the start of virtually every match since, it is Martins who has clearly been Fat Sam’s most undeserving victim.

The acrobatic Nigerian has expressed his loyalty to the club in no uncertain terms on more than one occasion, Geordie supporters having already wholeheartedly embraced him as their new cult number nine, yet one can’t help but feel Allardyce’s persistent partiality to Owen must be taking its toll on his spirits. Owen might still be the more decided finisher, but Martins has undoubtedly proven that he can be the present and future of the club’s attacking arsienal, though, if this summer’s faint transfer rumors were to be believed, Newcastle possibly face the prospect of losing him to Arsène Wenger’s attacking Arsenal.

When we signed Owen for a record £16 million from Madrid, I disagreed when people considered it an overly extravagant fee. Contrary to most, I thought he had succeeded quite well in Spain, considering the carousel of managers Real Madrid entertained between 2004 and 2005, and the constant pressure of an extremely skeptical local press. Some might forget he finished his only season in Spain with the highest goals-to-minutes played ratio in La Liga. He was approaching the natural prime of his career, and the only injury concern was a slightly niggling thigh problem from his days at Anfield. Since breaking a metatarsal bone during a 2005 New Years Eve match against Tottenham, however, he has displayed only a passing resemblance to the player he once was. We have long heard optimistic opinions from surgeons, specialists and former players alike on Owen’s chances at a full recovery, but despite it all, he has noticeably lost some of the pace so crucial to his success, and just can’t seem to stay healthy for more than a month, something even Allardyce’s mandatory yoga regimens cannot correct.

Perhaps the only astute act of Freddie Shepherd’s gluttonous reign at St. James Park was convincing Florentino Pérez he should purchase Jonathan Woodgate for £13.4 million. Like Owen, Woodgate was the first truly accomplished player in his position Newcastle could boast about in years, but an incredible misfortune with a slew of injuries began to ravage a potentially illustrious career. In Woodgate’s case, Newcastle management decided to cut their losses and cash in while they still could; this will surely draw the ire of many, but perhaps it is time they begin pondering doing the same with Owen.

If Kwik-E-Mart wasn’t around, it is very likely I would be far less dogmatic, but the truth is they are vying for the exact same place on the field alongside Mark Viduka. One demands the experience needed to develop, the other desperate to recapture his sharpness; translated, they both need to be starting every game. Fans have complained about an apparent apathy about Owen’s efforts on Tyneside this term, though I for one believe the new snarl on his face is as much a testament to long and lonely nights of reflection in a myriad of rehab clinics than a lack of passion for the Newcastle cause. Daily commutes on his Eurocopter Dauphin aside, I really do think he’s giving it his all, no less with the unfair burden of an entire nation’s expectations looming over him. Nevertheless, though it gives me no pleasure to say or even type it, I believe Newcastle United and Michael Owen have finally reached an impasse. David Moyes, you just might get your chance.