Football is driven by exaggerated caricatures. The ‘role model’ Kaka, the ‘inspirational’ Gerrard, the ‘lazy’ Ferdinand, the ‘fat’ Lampard, the ‘brilliant’ Messi, the ‘petulant’ Robinho, the ‘balding / granny-shagging / goal-shy / striker-who-plays-better-elsewhere-on-the-pitch / everton man’ Rooney, and so on.

Managers are not spared either – Fergie has the hair-dryer, Mourinho is the supreme motivator, Ramos is the tactician / taskmaster, Big Sam is the poster-child of ‘effective’ football, Ranieri is the Tinkerer and there’s plenty more if you go through England’s and Europe’s managers.

But there’s one species that baffles me. What the hell do you do with Ashley Cole?

On one hand there’s the Arsenal saga (which, in conjunction with the emergence of Clichy, has made people forget how good Cole actually was at Arsenal), the transfer to Chelsea, the petulance shown to referees, the cheating, the getting arrested for the dumbest thing…regular footballer fare really, it seems that apart from being a big-mouthed player with an equally big ego and a proportionally small amount of common sense, he’s done nothing out of the ordinary…

And on the other hand you have the abso-fkn-lutely gorgeous Cheryl Tweedy Cole. 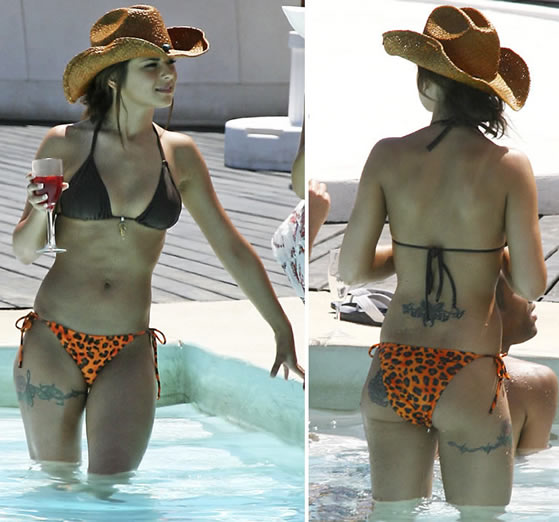 Get more of Cheryl Cole

A no-contest really. He might be a decent guy with some really angry Arsenal fans (they’re the sensible ones, so we should listen to them) giving him bad press, or he might be justifiably the most hated footballer in England (Barton’s done his best but he can’t beat Cole in jealousy for being with a beautiful girl now, can he?), but at the end of the day, I don’t remember him for his (good) football or his (bad) decisions, but mainly for his (hot) girl.

Or we could focus on how Arsenal fans think they’re a bigger club than everyone else. Up to you really.