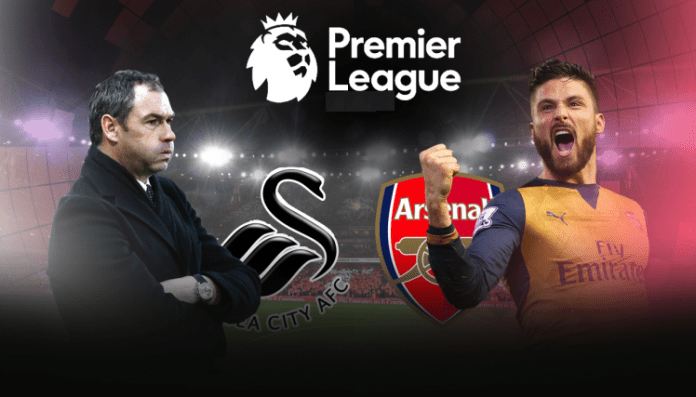 Swansea host Arsenal in the Premier League this weekend and new manager Paul Clement will be looking to make a winning start at home against the Gunners.

The Welsh side have had a season to forget so far and are 19th in the table with just 4 wins out of 20 games. Furthermore, they have a poor home record against the Gunners and will be under a lot of pressure tomorrow. Swansea have lost 3 of their last 4 home games against Arsenal.

Swansea have sacked two managers already this season and must start performing now if they want to stay in the Premier League for next year.

New Swansea manager Paul Clement will be without Neil Taylor and Jefferson Montero for his first Premier League match in charge.

Arsenal are heading into this game on the back of a four-game unbeaten run and the away side will be hoping to extend their impressive run of form against Swansea at the Liberty Stadium.

The Gunners are currently 5th in the standings and cannot afford to drop more points if they want to stay in the title race. Wenger’s side are already eight points behind Chelsea right now.

This is a must win game for the Londoners and they will need to be careful not to let Swansea catch them off guard.

The away side will be without Cazorla, Debuchy, Akpom, Coquelin, Elneny and Sanogo. Hector Bellerin will undergo a scan to discover the true extent of his ankle injury.

Arsenal are undefeated in 27 of their last 30 matches in the Premier League.

Swansea have conceded at least 2 goals in 8 of their last 10 home matches in the Premier League.

Arsenal have scored at least 2 goals in 5 of their last 6 away matches against Swansea in all competitions.

Arsenal have conceded at least 2 goals in their last 3 away matches in the Premier League.

Both Swansea and Arsenal have conceded a fair few lately. Over 2.5 goals seem likely in this one.

Arsenal have been tough to beat in the recent months and judging by their away record against the Swans, an away win seems likely.

Giroud has scored in his last four matches. Get him to score anytime here.

Swansea are in terrible form right now and are badly out of their depth here.

Despite their inconsistencies, Arsenal are far superior and should be able to grind out a win here. The home side will struggle to contain the likes of Sanchez and Giroud on current form.