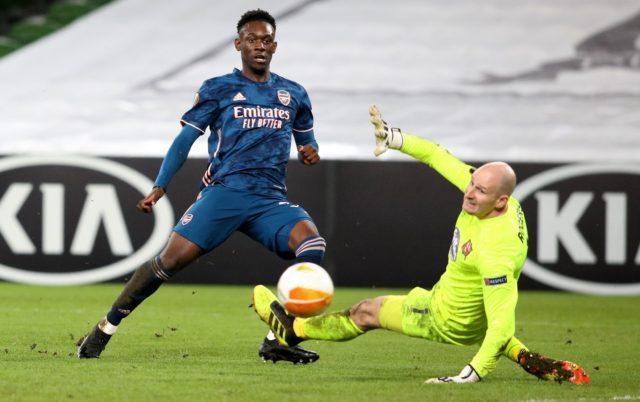 Championship club Swansea City have made contact with Arsenal over a potential loan deal for Folarin Balogun this month, a report from Football Insider claims.

The 19-year-old is regarded as one of the Gunners’ promising young graduates and he has already made an impact with two goals in the Europa League off the bench.

However, he has yet to make his Premier League debut and is currently in a position where he can speak with foreign clubs, having entered the final six months of his contract.

Swansea have had an impressive season in the Championship where they are placed second in the table and they are said to be keen on pursuing a new striker.

Michael Obafemi of Southampton was identified as a potential loan target, but their interest ended after he picked up a significant muscle injury.

Hence, they appear to have switched their attention towards Balogun, but they are only looking to sign him on a temporary basis.

Balogun was initially fancied to leave the Gunners during last summer’s transfer window and Sheffield United made an approach to sign him.

However, they could not make the breakthrough in the negotiations and Balogun has since made only five senior appearances totalling 74 minutes.

In his short time, he has already shown that he has an eye for goal and it remains to be seen whether Steve Cooper’s side can convince the Gunners to loan him out.

The Swans have been the best defensive side in the Championship this term with only 13 goals conceded, but they hold only the 10th-best scoring record (27 goals from 23 games).

Balogun has yet to taste league action, but he does have plenty of potential and could have a similar impact to Rhian Brewster for Swansea during the backend of last season.

Brewster was a huge hit with 11 goals from 22 outings on loan from Liverpool and Balogun has shown from his academy days that he is a regular in finding the back of the net.

Still, a loan move may be dependent on whether the Gunners are able to negotiate a contract renewal with the teenager in the coming days.