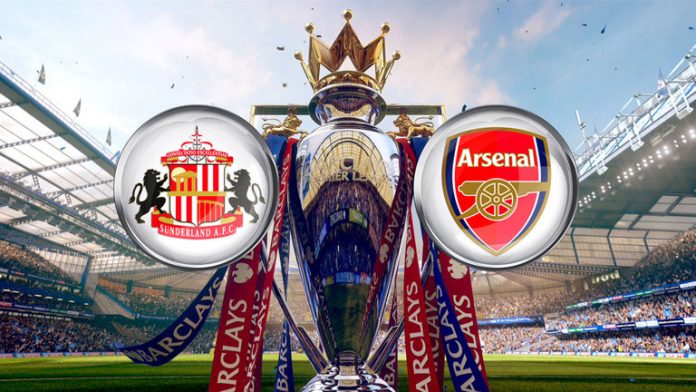 Arsenal travel to the Stadium of Light for their Premier League clash against Sunderland this weekend.

The Gunners are in scintillating form right now and will look to pile further misery on David Moyes and his struggling Sunderland team.

Arsene Wenger‘s side are second in the league table, level on points with leaders Manchester City. Considering City’s form right now, a big win for the Londoners could well send them to the top of the table.

The away side will be delighted with the return of Ramsey and Coquelin. However, the absence of Cazorla and Xhaka could hurt them against a defensive team like Sunderland. Defensively, Arsenal captain Per Mertesacker‘s absence is also a blow. Danny Welbeck and Akpom are injured and will miss out as well.

Sunderland will be dreading their game against Arsenal this week. The home side are in disastrous form and could get humiliated at home once again.

They have lost seven of their last nine Premier League games and are yet to win a single game this season. The Black Cats will be up against the most in-form team in the division right now and could be in for another torrid 90 minutes.

David Moyes is already under immense pressure and will be without seven of his first team players for this game. Sebastian Larsson, Fabio Borini, Jan Kirchhoff, Vito Mannone, Adnan Januzaj, Jason Denayer and Lee Cattermole are all injured.

Arsenal have won their last 3 away matches in the Premier League.

Arsenal are undefeated in their last 9 matches against Sunderland in all competitions.

Arsenal are in breathtaking form right now and have an excellent head-to-head record against Sunderland. Get the Gunners to win at 2/5 with Ladbrokes.

Arsenal have kept 2 clean sheets in their last two away games against Sunderland. Get Arsenal to win to nil at 11/8 with Ladbrokes.

Sunderland’s terrible form is likely to continue here. Arsenal are full of confidence and have the quality to thrash the home side.

Arsene Wenger’s side will be without some of their key players, but they have the quality to pick up the all-important three points here. An away win seems quite likely judging by the form of the two sides.