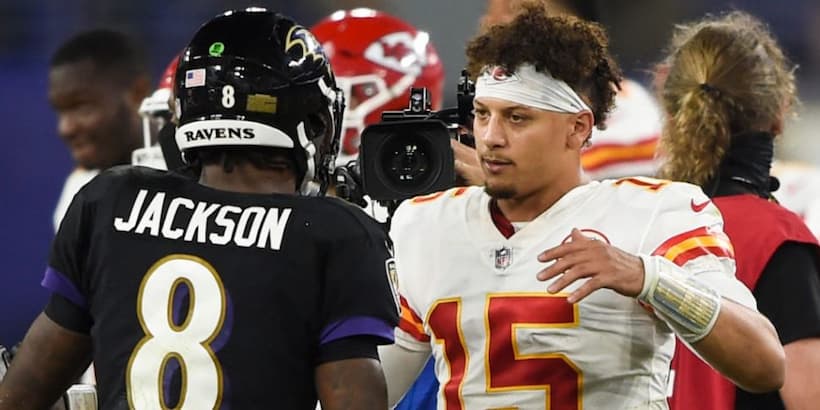 NFL fans can claim a $1,000 deposit bonus and a risk-free $25 Free Player Prop Bet by signing up to BetOnline to wager on Chiefs vs Ravens tonight!

After a tough overtime loss to the Las Vegas Raiders in Week-1, Baltimore Ravens have the chance to kickstart their season on home turf vs Mahomes, Travis Kelce, Tyreek Hill, and the rest of Andy Reid’s star-studded Kansas City Chiefs.

For a full betting preview, plus the latest odds and deposit bonuses on offer at BetOnline, read on.

Below are the latest odds available for this game courtesy of BetOnline sportsbook:

The Chiefs had a tough game themselves last Sunday vs the Cleveland Browns, that is until an inspired second-half performance from Patrick Mahomes and WR Tyreek Hill (197-yards) eventually saw them come out on top in a 33-29 epic.

If the Browns taught us all anything though, it’s that this Chiefs’ secondary can be tested by a solid passing game, and that the DL is susceptible to a strong rushing attack. So, don’t be surprised to see the Ravens at least cover the 3.5 spread.

The BetOnline sportsbook currently offers a generous $1,000 deposit bonus to all newcomers. Sign up today to use the promotion in conjunction with tonight’s Chiefs vs Ravens game.

This game is quite rightly being billed as a battle between two of the NFL’s best QBs, Lamar Jackson and Patrick Mahomes. It’s unquestionable that Mahomes boasts the best arm in the NFL at this point, and nobody would argue that Jackson is the league’s most explosive and athletic signal-caller, either. As such, tonight’s winning team is likely to be the one that’s led by whichever QB makes fewer mistakes with the football. It should be a fascinating contest either way.

On paper, the Kansas City Chiefs boast one of the best offensive lines in football. But it takes time for a new unit to gel, as evidenced by the uncharacteristic pair of sacks surrendered to the Browns last weekend, which is a match-up the Ravens should be looking to exploit…

That said, the typically excellent Baltimore pass-rush unit wasn’t in top form vs the Raiders, but there is an opportunity to correct that against Mahomes tonight. The likes of Patrick Queen and Calais Campbell have got to show up if the Ravens are to stand a chance: giving Mahomes time in the pocket is as good as throwing up a white flag.

The Chiefs’ star receiving pair of Tyreek Hill and Travis Kelce is a test for any secondary in the NFL, so the absence of Marcus Peters who is out for the season after suffering an achilles injury last week is a huge loss for the Ravens. So too is the potential absence of CB pairing Marlon Humphrey and Jimmy Smith, who are both listed as questionable. It’s hard to envision the Baltimore fans in a celebratory mood tonight if neither is able to start.

The only injury concern for the Chiefs is with LB Willie Gay, who remains on IR with an injured toe.

With the home crowd behind them and the bitter taste of that Jackson fumble and the subsequent overtime defeat to the Raiders fresh in mind, expect a much-improved performance from the Baltimore Ravens.

Will it be enough to beat the consensus agreed best team in the AFC though? Perhaps not – at least not unless the new RB duo of Latavius Murray and LeVeon Bell come out hard and rack up yardage on the ground.

With a point to prove after last week, the excellence of QB Lamar Jackson should keep this game close though. So, we’re taking the Chiefs to win, but the Ravens to cover the +3.5 spread.