Manchester United were held to a draw for a second consecutive away game as Louis van Gaal cried fatigue in a 0-0 draw at Tottenham Hotspur.

United had less than 48 hours rest between Boxing Day and their trip to White Hart Lane so the Dutch manager may be relieved that his players have had three days off to prepare for their trip to Stoke City.

Mark Hughes’ side are on back-to-back wins, keeping clean sheets against both Everton and West Brom since Christmas Day. Prior to that they had gone 11 games without a clean sheet.

Phil Bardsley has missed Stoke’s last two games with an ankle injury and remains a doubt for this one. Mark Hughes has a back four that’s worked over the past two games so it may be difficult for the former Manchester United yuongster to get back in when fit anyway.

Victor Moses and Peter Odemwingie are long-term injury in midfield for the Potters. Steve Sidwell and Stephen Ireland are closing in on their returns but this one may come too soon for the pair of midfielders.

Bojan picked up a hamstring late in Sunday’s game that makes him a serious doubt to face Manchester United.

Luke Shaw got 15 minutes against Tottenham, Chris Smalling got a little longer and Phil Jones and Jonny Evans have started the past four and five games respectively, leaving Louis van Gaal with only Marcos Rojo unavailable in defence.

Ángel Di María looks set to miss out again with a pelvis injury. The Argentine has been troubled for a lot of his time with injuries since arriving from Real Madrid in the summer. Stoke’s probably not the best team to take a chance on him.

Antonio Valencia came off at half-time versus Spurs with a groin injury, Ander Herrera is yet to return and Daley Blind and Marouane Fellaini are ruled out of this one. 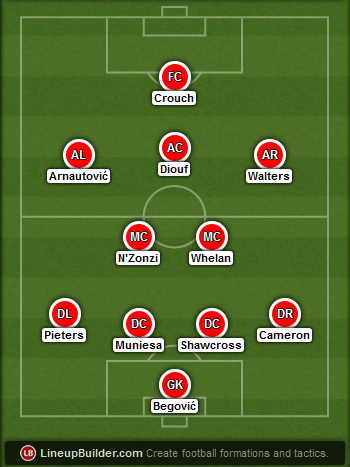 Geoff Cameron has moved to right-back in the absence of Phil Bardsley and Glenn Whelan has come back into midfield. Should Bojan not be fit then we’d expect Peter Crouch and former United player Mame Biram Diouf to start up front. 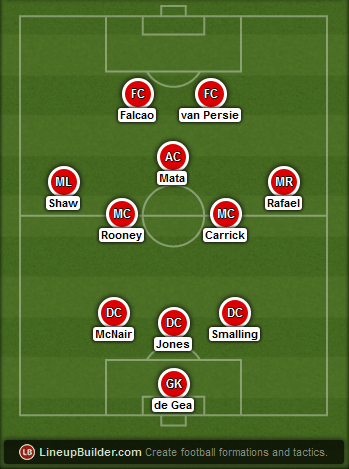 Louis van Gaal has enough defenders available to play a back four but he’s lacking central midfielders now so we think he’ll stick with the 3-5-2 formation. Luke Shaw and Rafael could be fit to start those roles, otherwise Ashley Young is available to start ahead of Shaw.

Robin van Persie vs Marc Muniesa
Robin van Persie has scored 10 goals in 10 Premier League matches versus Stoke and scored in his first four appearances as a United player versus the Potters before failing to find the net against them earlier this season. He’s in form and Stoke’s defence had been shaky prior to the last week. It’s a tough ask for the home side to keep this United side quiet and we’re expecting the Dutch striker to add his name to the scoresheet once again versus Stoke.

Wayne Rooney vs Glenn Whelan
Wayne Rooney has been an influential player in the United midfield of late and should Stoke’s defensive midfield duo not mark his as closely as Ryan Mason, then the England captain will have a great chance of adding another goal to his name. Only six short of tying Andrew Cole on the all-time goalscorers list, his runs from midfield have gone unmarked a number of times this month and that could be a difference maker in this match.

Juan Mata vs Steven N’Zonzi
One Stoke City midfielder has to pick up Wayne Rooney, leaving the other to pick up Juan Mata. It’s going to be a tough task for these two alone to keep the in-form United duo. We’d expect they’ll get support from the attacking midfield but even still Juan Mata has the ability to unlock any defence. The Spaniard is in-form and provided he doesn’t get caught by a nasty tackle or two we expect him to be a big influence on this match.

Prediction: Stoke City 1-1 Manchester United
Stoke City have picked up their form over the past two games whilst Louis van Gaal has moaned about the lack of rest between games. United were very flat in the second half at White Hart Lane so we wouldn’t be surprised if the same happens at the Britannia Stadium on Thursday. On top of that, it’s not an easy place to go to.