Arsenal have won only one of their six Premier League trips to the Britannia Stadium, winless in their last four and losing three times.

However, the Gunners have found their form with three victories to nil in their last three games in all competitions. They have not been overly impressive since beating Borussia Dortmund; 1-0 winners at West Brom over the weekend and late 1-0 winners at home to Southampton on Wednesday.

Stoke aren’t in any form at all – losing their last three, including a 2-1 loss to Burnley in their last home game.

Stoke have had a few illnesses and injuries in defence of late but now only Robert Huth is on the sideline. The German has been there since the start of the season.

Mark Hughes has a limited choice of midfielders to choose from due to injuries. It turns out Steve Sidwell’s knee injury will keep him out until the new year. Glenn Whelan is out for at least one more week with a calf injury. Jonathan Walters missed the loss to United midweek with a knee injury but could be fit in time to face Arsenal.

Victor Moses is out until the New Year and Peter Odemwingie remains sidelined for this game.

Wojciech Szczęsny could be fit to take his place back in the first team but his replacement Emiliano Martínez has kept three clean sheets in three wins whilst the Polish goalkeeper has been out with a rib injury. Backup goalkeeper David Ospina is unavailable.

Right-back Mathieu Debuchy isn’t ready to return yet but Arsène Wenger has the rest of his defence available to him.

Similar to Stoke, Arsenal have numerous midfielders in the injury room. Mesut Özil is out for a while, Jack Wilshere due to return in February, About Diaby is always injured and Serge Gnabry is lacking match fitness. It’s possible that both Mikel Arteta and Theo Walcott take some part this weekend. 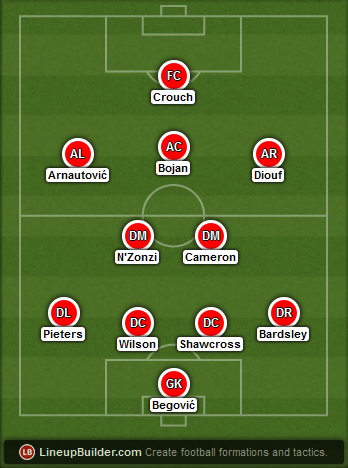 Injuries in midfield should see Geoff Cameron partner Steven N’Zonzi in front of the back four and Phil Bardsley play at right-back. Injuries in midfield may also see Mame Biram Diouf move out to the right wing and Peter Crouch play up front. Charlie Adam and Oussama Assaidi are alternative options available to Mark Hughes. 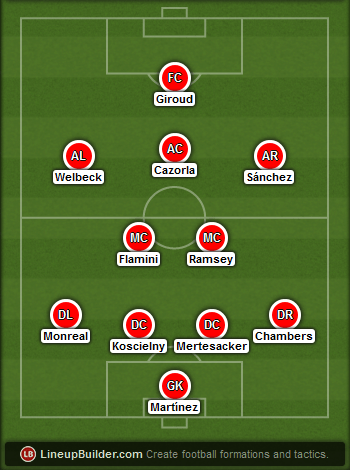 Olivier Giroud started on the bench midweek but the Gunners only scored when the French striker came on. We expect him to be fit to start this weekend. That would see Alex Oxlade-Chamberlain benched, Danny Welbeck moving to the left wing and Alexis Sánchez moving to the right. The only changes we can see happening defensively would be Wojciech Szczęsny returning in goal or possible Kieran Gibbs starting at left-back.

Alexis Sánchez vs Erik Pieters
As has been their key player in all their games this season, Alexis Sánchez threatens to be just that once again this weekend. The Chilean scored Arsenal’s late winner midweek when starting on the left wing. He’s actually had most success in the middle but has been very effective out on the right too. Erik Pieters is a tough tackler but lacks pace and that’s one way Sánchez can beat him on Saturday. Stoke have kept just one clean sheet in their last 11 Premier League games.

Santi Cazorla vs Geoff Cameron
Arsenal’s Spanish playmaker has been moved into the middle lately. Santi Cazorla has Olivier Giroud up front to aim for as well as Danny Welbeck and Alexis Sánchez outside of him. That’s good company for a player who’s a very good passer of the ball. Geoff Cameron and Steven N’Zonzi will have their work cut out to slow him down, as well as Aaron Ramsey alongside him.

Calum Chambers vs Marko Arnautović
On paper, Arsenal certainly win the match up down their right wing. Marko Arnautović is not the best of defensive players, so not only will Alexis Sánchez see several one-on-one matchups against Erik Pieters but Calum Chambers pushing on from right-back might find some space down the wings when Marko Arnautović does not fully track back. The young Arsenal defender has been a decent attacking threat, teaming up with Sánchez and putting some balls into the box.

Prediction: Stoke City 1-2 Arsenal
Arsenal have a poor record here in recent seasons but they’ve found some form of late whilst Stoke City are drifting closer to the relegation zone each week. Mark Hughes’ defence have failed to shut out opponents for a few months now and his midfield is wrecked by injuries. Arsenal are in some form of their own and have a great matchup in midfield here to come away with three points.