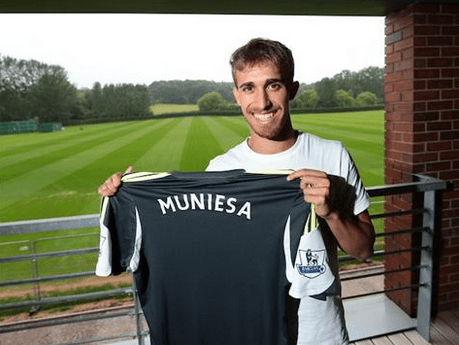 Spanish U21 international defender Marc Muniesa has signed for Premier League side Stoke City on a free transfer. The 21-year old has signed a four-year deal with the Potters.

‘I’m very excited about moving to England to play for Stoke City and will do everything I can to help the Club. It wasn’t a big decision for me to make. I came to England yesterday to meet the people at the club and look around the training ground, which is very impressive. I can’t wait to get started for Stoke.’

Muniesa was part of the Spanish side that won the European U21 Championships. The young defender has been a regular in Barcelona’s B team for the last four years, and subsequently moved in search of first-team football.

New Stoke City manager Mark Hughes was a former Barcelona player in the 1980s, and Stoke Chief Executive Tony Scholes revealed it was Hughes’ links to Barcelona which made the deal happen.

Muniesa has only made two senior league appearances for the Catalan giants, while featuring in over 80 games for the reserve side. With the Spaniard not promised regular action next season at Barcelona, Stoke took advantage.

He is highly-regarded in his native country, and is hoping he can represent Spain at senior level in the future.