Beware Liverpool. Luis Suarez happy at the club? Yes. Champions League football at Anfied next season? Yes. Plus, he has signed a long term contract extension last season. So what? When Real Madrid pins someone as their first choice target, hell’s forbid, you can be rest assured, it is as good as done. 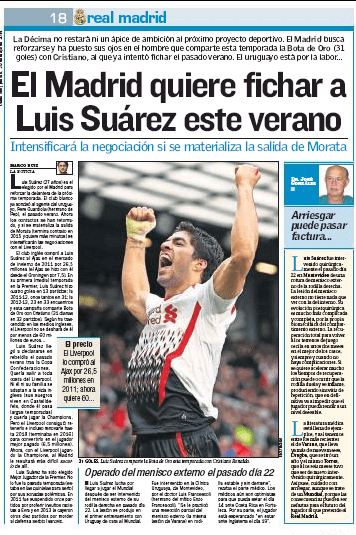 Liverpool are in no mood to sell Suarez. And why should they? He is their talisman and the team will once again look up to him during their Champions League campaign.

The only problem is Real Madrid. They get what they want. And this time they want Luis Suarez. They are ready to go to any extreme to sign him.

According to Spanish newspaper AS, Real Madrid had already contacted the player’s agent last summer and they’ve contacted yet again.

Suarez quickly became one of the best players in the Premier League and Liverpool aren’t willing to let him go for less than €60m, but Real Madrid are willing to pay to add another galatico to their collection.

€60M for Suarez? We can’t help but say – What do you think they’re smoking over there at the Bernabeu?