Anytime two of England’s biggest clubs face off, it makes for a must-see occasion.

But, today’s match at Anfield between north-west rivals Liverpool and Manchester United isn’t the only big ticket in England this weekend, as on Sunday, London rivals Arsenal and Chelsea battle it out at the Emirates Stadium.

Both clashes shape up to be pivotal in affecting the early-season standings, as the EPL’s ‘Big Four” are currently 1-4 in the current league table.

Aside from their excellence domestically, all four sides have qualified for the round of 16 in the Champions League for the third time in four years, with Manchester United and Chelsea topping their respective groups.

First billing goes to the showdown between the Reds and the Red Devils, and so without further ado, let’s kick off the preview of the match.

Manchester United have dominated the rivalry in the last several seasons, and the reigning league champions will have good reason to feel confident about their chances, but with free-scoring Liverpool riding high after their success over Marseille earlier this week, the home side are going to be looking to round off a huge week in style and leap back into the thick of the title race.
.

Rafa Benitez’s Liverpool come into this weekend on a scoring binge domestically and continentally, having scored 26 goals in their last seven league and European matches.

Despite suffering their first loss of the Premier League campaign last weekend, going down 3-1 away to an inspired Reading side, the Reds bounced back by crushing Marseille 4-0 in France on Tuesday night to book their place in the round of 16 of the UEFA Champions League.

Currently, Liverpool are holding down fourth in the league, tied with Portsmouth and Manchester City on points but significantly ahead of the two sides on goal difference, and with a game in hand.
.

United’s title defense got off to a slow start in the first month of the season, as they took only two points from the first three matches.

It took more than a month to score more than one goal in a match, but since a 1-0 victory over Roma on October 2nd, United have scored two goals or more in 10 of 12 overall matches.

Along with being in the running to defend their title, they easily topped Champions League Group F, winning five and drawing one to finish with the highest point total of any of the 32 sides in the group phase.

United currently sport the highest goal difference (+21) and best defensive record in the Premier League, having allowed only eight goals in 16 league fixtures.
. 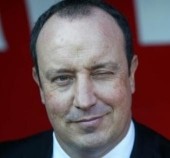 Rafa Benitez has been the object of much speculation and rumor lately, as to whether or not his days as Liverpool manager are numbered, after disagreements over transfer-related matters with the club’s owners, but for the time being, he’s still the man toeing the touchline.

Benitez is no stranger to such clashes, as similar issues helped contribute to his exit from former club Valencia in 2004. While with Valencia (2001-04), he led them to two La Liga titles, in his first and last seasons, and also to a UEFA Cup triumph in that last campaign in 2003/04.

While domestic success has eluded Liverpool, aside from a win in the 2006 FA Cup final, he led the Reds to the Champions League crown in his first season in 2004/05 and to the final again last term. 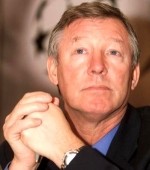 There are few managers in history who can claim the success that Sir Alex Ferguson has achieved throughout his career. As manager of SPL side Aberdeen, he won 10 trophies – 3 SPL title, 4 Scottish Cups, 2 league cups, the 1982/83 European Cup Winners’ Cup, and the 1983 European Super Cup.

He’s had more than double that success in his two decades at United, winning nine league titles, five FA Cups, two League Cups, and seven Charity Shields, and on top of that, a Champions League title, a second Cup Winners’ Cup, a Super Cup, and the Intercontinental Cup in 1999.
.

When the two sides hit the pitch on Saturday, many of the best talents on the continent – and in the world – will be on display.

Rafa Benitez rotates his lineup on a regular basis, but there are a few definite mainstays in the lineup, most notably the talismanic Steven Gerrard, who might be in the best run of his career, having scored 10 of the last 12 matches, and providing for others just as prolifically.

Big-money summer trasnfer Fernando Torres is justifying being just as much of a regular in the starting XI, with five goals in the last six matches and 12 overall. Who will start up front with him (if he does start) is a question mark – it could be Peter Crouch, Andriy Voronin, Dirk Kuyt, or Liverpool’s other Dutch striker, 20-year old Ryan Babel, who has made nine starts but has proven to be more productive off of the substitute’s bench (five of his six goals have come as a sub). No telling how avid of a coin collector Rafa is, but he may keep a few handy to help decide his starting strikers each time out.

Goalkeeper Jose Reina has been Liverpool’s starting keeper since the 2005/06 season, and has been in fine form thus far this season, with a sparkling record of 14 clean sheets in 23 overall matches. His job is made easier by having the likes of Mr. Dependable, Jamie Carragher (underrated but certainly appreciated) at the back, along with Alvaro Arbeloa, John Arne Riise, and Sami Hyppia, who seems to have gotten over his own-goal issues from earlier in the season.

Reina’s counterpart between the pipes, veteran Dutch keeper Edwin Van der Sar, has shown no signs of fading in form as he’s gotten older, and has 10 clean sheets in 19 starts this season.

For United, the cogs of the defense are center backs Rio Ferdinand and Nemanja Vidic, and left back Patrice Evra. The right-back position is a spot of debate, but Gary Neville should return to his old position soon, after a lengthy spell on the sidelines.

United’s biggest strength depth-wise is in midfield, where there are a bevy of options, from the old guard (Ryan Giggs and the currently injured Paul Scholes) to the rising stars (Anderson and Nani), and a great deal in between, including England internationals Michael Carrick and Owen Hargreaves, and Darren Fletcher.

Their attack though, is one of the most formidable in the game, led by Portuguese playmaker midfielder/forward/ringmaster/female species aficionado Cristiano Ronaldo, who has 14 goals thus far. Up front, Wayne Rooney, who has recently returned from his second injury problem of the season, and Carlos Tevez, who is paying off United’s persistence at signing him from West Ham, have proven that they can flourish as strike partners despite the comparisons in their playing styles.
.

Manchester United have had the bragging rights in the last five years, losing only once in the last ten league encounters between the sides (8 wins, 1 draw in the other matches).

The last time they met was at Anfield in March, when the match appeared headed for a goalless draw until John O’Shea scored a last-minute winner to lift United to a 1-0 victory.

Anfield has proved to be a home away from home for United recently, as Sir Alex’s sides have gotten points in each of their last five league trips (four wins, one draw).
.

Checking Out the Form Sheet

For a team to go into Anfield and take all three points is a rare occurrence, as Liverpool have dropped only five home league matches during Rafa Benitez’s tenure.

But, to do so will require finding a way past a rock-solid defense, and at the same time, being just as resolute in their own back line, keeping Gerrard and Torres at bay for 90+ minutes.

As for Liverpool, a performance more like the clutch one delivered on Tuesday night and less like last Saturday at Reading is a must in order to give themselves a chance to break the recent hoo-doo against United.

With the way that both teams have been finding the net with regularity recently, you’d have to expect, or at least hope, that this encounter should see more scoring than many of the previous ones, unless you’re a fan of the defenses running the show.

Expect plenty of intensity, a lot of excitement, and maybe some late drama. It could very well turn out to be a dour, disappointing match, but no one wants that, do they?

Their clash at Old Trafford in a little over three months may wind up being far more significant in the title race, but that doesn’t lessen the importance of the match, both in its effect on the table, and because if one of the sides comes out on top on Saturday, it’ll make going to sleep and waking up on Sunday morning a whole lot nicer (minus the celebration-induced hangover).

I’ve been leaning towards a draw, but it’s hard to look past United’s recent success at Anfield, and therefore, I’ll take the visitors in a five-goal thriller.